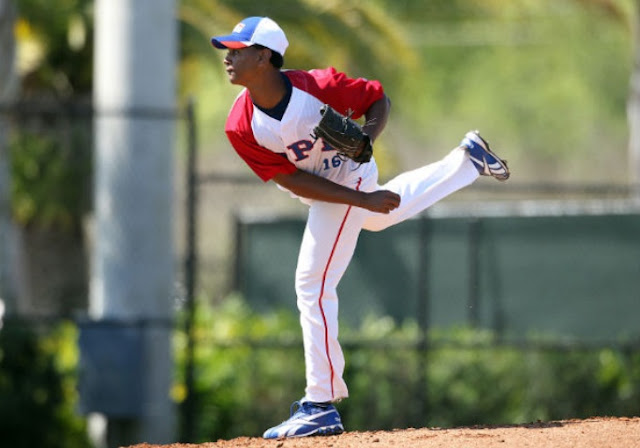 I'm surprised with this news since the Dodgers haven't been signing any international players lately.


The Dodgers, missing in action on the international bonus scene in recent years, have agreed to sign 16-year-old right-handed pitcher Bryan Munoz from the Dominican Republic for a reported $300,000 bonus, pending a physical exam.
The signing will mark a re-entry by the Dodgers into a Dominican market they once owned. They ranked last in Major League Baseball last year in money spent on international signings. The Dodgers outbid the Rangers, Twins, Tigers and D-backs for Munoz.
The agreement was reached last week, while Munoz was in Arizona with the Dominican Elite Travel Team. The signing bonus is believed to be the largest the Dodgers have given a Dominican player since signing Joel Guzman for $2.25 million in 2001.

Is he the next Pedro Martinez? Who knows. I'm just happy that the Dodgers are back in the international scene.

Here's a video of  Bryan Munoz. It was shot last year.


The DPL Elite Travel Team has returned safely to the Dominican Republic but before they arrived RHP Bryan Munoz decided to return to the Island as a Los Angeles Dodger. Munoz participated in the Louisville Slugger Tournament Series in January and was selected to the DPL All-Star game in February and pitched very effectively, as a result he was selected to the DPL Elite Travel Team. Bryan has been consistent in every outing he’s had, in his first start in Arizona he didn't allow a single ball to leave the infield until the fourth inning. Munoz topped out at 90 mph and showed good command to both sides of the plate working consistently at 88-89 with good pitch-ability, breaking three bats in his highly effective outing. His curveball showed hard spin and good depth that registered as high as 81 mph, though it was at its best at 79. He also worked in an occasional low 80s changeup up to 83 mph. Munoz changes his arm slot at times, but generally throws from a high 3/4 slot with a loose whippy live arm. Before taking a flight back home Bryan Munoz agreed to terms with the Dodgers for $300,000, per his agent Kevin Bandel.
Good luck Bryan!
Posted by Roberto Baly at 2:30 PM