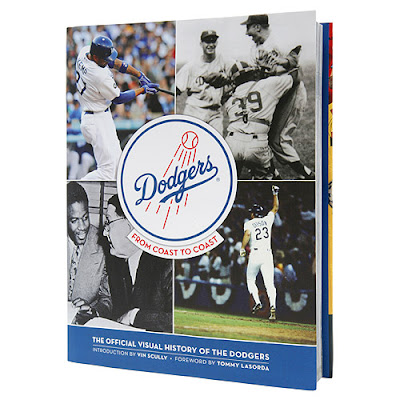 Last week I told you about this great book that's coming out soon. {linked here}

Dodgers have sent out a press release this morning giving more details. It looks fantastic.

As part of the 50th Anniversary of Dodger Stadium presented by State Farm, which will be celebrated throughout the 2012 season, the Dodgers have created an official illustrated history coffee table book for the first time in franchise history. The book recalls the franchise’s rich and storied past and is entitled “Dodgers: From Coast to Coast - The Official Visual History of the Dodgers.”

“In many ways, I’ve often thought that the franchise is somewhat a reflection of life itself…The joys and heartache…all of that has really helped me feel how important the organization has been to all of baseball, to all of the fans and, very much, to me,” says Dodger Hall of Fame broadcaster Vin Scully in the book’s introduction. “This book does a wonderful job of capturing the essence of the Dodgers.”

“Dodgers: From Coast to Coast” will be released on Opening Day, April 10, as the Dodgers open at home against the Pittsburgh Pirates at 1:10 p.m. It will be available for purchase at Dodger Stadium merchandise locations and online at www.dodgers.com/book for $40.

"I am so happy that this book will be available to Dodger fans,” said Dodger Hall of Famer Tommy Lasorda. “It is an outstanding account of the history of the Dodgers and a piece of history that I am proud to be a part of. If you love the Dodgers, you will love this book."

The book chronicles the colorful history of the Dodgers dating back to the team’s roots in Brooklyn in the 1890s and includes rare photographs and documents, unique memorabilia and never-before-seen photos. Highlights include the arrival of Jackie Robinson in 1947 and a first-person interview with him from a 1971 Sport Magazine luncheon, the story of the team’s pioneering move to Los Angeles in 1958 and an intimate look at the Dodgers’ six World Championships and postseason glory. It also details how the Dodgers’ historic baseball legacy merged with Hollywood, tells the story of Dodger phenoms Sandy Koufax, Hideo Nomo and Fernando Valenzuela and profiles current rising stars Clayton Kershaw and Matt Kemp.

“Dodgers: From Coast to Coast - The Official Visual History of the Dodgers” is published by Skybox Press/Abrams and was compiled by Dodger Team Historian Mark Langill and Dodger Publications Director Jorge Martin.
Posted by Roberto Baly at 10:30 AM

This book is available right now on mlb.com for those of you who want it now