This will be the 63rd season for Vin Scully.

No more visits to Colorado. Scully to broadcast all home games and all road games in California and Arizona. 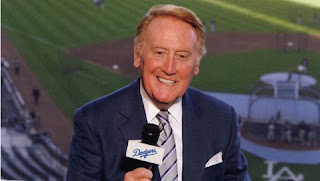 The Los Angeles Dodgers have announced their 2012 regular season broadcast schedule, which includes approximately two-thirds of their games on television on PRIME TICKET and one-third on KCAL 9.  National and regional telecasts on FOX and ESPN complete the schedule. On the radio, fans can listen to all games on Dodgers Radio AM 570 Fox Sports Los Angeles and in Spanish on Univision Radio’s KTNQ 1020.

The Dodgers begin the season on PRIME TICKET on Thursday, April 5 as they play the Padres in San Diego at 4:05 p.m. PRIME TICKET will also televise Opening Day in Los Angeles on Tuesday, April 10, when the Dodgers take on the Pittsburgh Pirates at 1:10 p.m., as the team celebrates the 50th anniversary of Dodger Stadium presented by State Farm. PRIME TICKET’s season preview special will air on Wednesday, March 28 at 10:30 p.m.

National telecasts for the Dodgers this season include ESPN’s Sunday Night Baseball on May 20 vs. the World Series champion St. Louis Cardinals and four Saturday games on FOX. FOX telecasts include June 9 at Seattle, June 23 at the Los Angeles Angels of Anaheim, June 30 against the New York Mets at Dodger Stadium and September 8 in San Francisco.

Hall of Fame broadcaster Vin Scully, entering an unprecedented 63rd season as the “Voice of the Dodgers,” will call more than 100 games for the Dodgers this year, including all televised Dodger home games and road telecasts in California and Arizona. The first three innings of each of the games Scully calls will be simulcast on the radio. Scully’s 62 years of service constitute the longest tenure of any broadcaster in sports history.

For other road games, the broadcast booth will be manned by former Major Leaguer Steve Lyons, who is returning for his eighth season as an analyst on Dodger telecasts, and Eric Collins, who is entering his fourth season calling Dodger baseball.

The Dodgers’ English-language radio broadcast will be led by the award-winning team of Rick Monday and Charley Steiner. Monday begins his 19th season as a Dodger broadcaster and 27th overall with the organization, including eight as a player. Steiner enters his eighth season as a play-by-play announcer for the team.

Hall of Famer Jaime Jarrín, Pepe Yñiguez and legendary Dodger pitcher Fernando Valenzuela will call the action in Spanish for the Dodgers. Jarrín enters his 54th season in the Dodgers’ Spanish-language radio booth and Yñiguez will begin his 14th. Valenzuela enters his 10th season calling games for the Dodgers after a 17-year playing career.

PRIME TICKET enters its 16th season as a telecast partner of the Los Angeles Dodgers. Dodger season coverage on PRIME TICKET in 2012 will again feature “Dodgers Live” pre- and post-game shows at home and on the road led by Patrick O’Neal and Steve Lyons. PRIME TICKET and sister network FOX Sports West have provided local sports coverage to Southern California, Nevada and Hawaii for more than 25 years.

KCAL 9 is in its seventh season as the over-the-air broadcast home of the Dodgers and will once again present all of its regular season Dodger game broadcasts in high definition. KCAL 9’s Dodger gameday coverage will include the station’s THINK BLUE TV pre-game show with sports anchor Gary Miller and former Dodger Eric Karros. KCAL 9 and sister station CBS 2 also provide comprehensive year-round Dodger coverage on their nightly sports show Sports Central.

Dodgers Radio AM 570 Fox Sports Los Angeles is entering its first year as the Dodgers’ flagship radio station. AM 570 will broadcast all 162 regular season games as well as post-game Dodger Talk with Kevin Kennedy and David Vassegh.

Dodger games this season will be available in Spanish on Univision Radio KTNQ 1020AM for the second consecutive season.

Click here for the TV schedule.
Posted by Roberto Baly at 9:30 AM

God bless you, Vin Scully. He still is going to be working over 100 games as a 84 year old!

I hope he continues to have good health and can work a few more years - at least home games and San Diego and San Francisco.