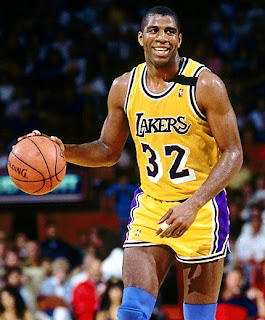 Ken Gurnick with the big news via Twitter.... {linked here}


The Dodgers have reached an agreement to be sold to Magic Johnson's bidding group, according to a baseball source.

This story is developing. I'll have more later.

With a bid of $2 billion, Mr. Johnson and partners Peter Guber, Stan Kasten, Bobby Patton and Todd Boehly beat out a group of some of the wealthiest businessmen in the country to land a team that is one of Major League Baseball’s flagship franchises. The sales figure shatters the previous record sales price for a U.S. sports franchise, Steve Ross’s purchase of the Miami Dolphins for $1.1 billion three years ago.

Official statement from the Dodgers and Magic Johnson -

The Los Angeles Dodgers and Frank McCourt Announce Agreement With Guggenheim Baseball Management LOS ANGELES, March 27, 2012 – The Los Angeles Dodgers and Frank McCourt today announced an agreement under which Guggenheim Baseball Management LLC (“GBM”) will acquire the Los Angeles Dodgers for $2 billion upon completion of the closing process. The purchasing group includes Mark R. Walter as its controlling partner, as well as Earvin “Magic” Johnson, Peter Guber, Stan Kasten, Bobby Patton and Todd Boehly. Mr. McCourt and certain affiliates of the purchasers will also be forming a joint venture, which will acquire the Chavez Ravine property for an additional $150 million.

The Los Angeles Dodgers stated, “This transaction underscores the Debtors’ objective to maximize the value of their estate and to emerge from Chapter 11 under a successful Plan of Reorganization, under which all creditors are paid in full.”

Frank McCourt stated, “This agreement with Guggenheim reflects both the strength and future potential of the Los Angeles Dodgers, and assures that the Dodgers will have new ownership with deep local roots, which bodes well for the Dodgers, its fans and the Los Angeles community. We are delighted that this group will continue the important work we have started in the community, fulfilling our commitment to building 50 Dream Fields and helping with the effort to cure cancer.”

Earvin “Magic” Johnson stated, “I am thrilled to be part of the historic Dodger franchise and intend to build on the fantastic foundation laid by Frank McCourt as we drive the Dodgers back to the front page of the sports section in our wonderful community of Los Angeles.”
Posted by Roberto Baly at 8:05 PM

Wow, oh wow! I can see Magic's smile in my head right now.

Any word if the parking lots are included in this deal?

Wait is McCourt going to own the stadium??? If you see where it says he'll be forming a group for 150 million. I really hope that's a typo

This is bad azz! I'm very happy Magic Johnsons group took it, but I would of been more happy if Steve Garvey and Orel Hershiser was in that group,,, Forever Dodgers!

This totally makes up for that 6 to 5 loss to the Padres in spring training.