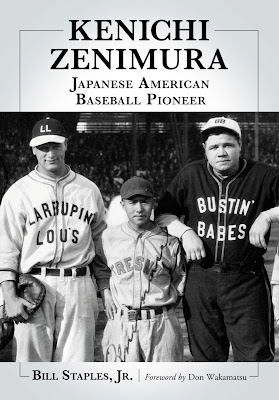 Copies of his book will be available and a signing will be held.

Few baseball fans know about the Japanese American Nisei Leagues, or of their most influential figure, Kenichi Zenimura (1900-1968). A talented player who excelled at all nine positions, Zenimura was also a respected manager and would become the Japanese American community's baseball ambassador. He worked tirelessly to promote the game at home and abroad, leading goodwill trips to Asia, helping to negotiate tours of Japan by Negro League All-Stars and Babe Ruth, and establishing a 32-team league behind the barbed wire of Arizona's Gila River Internment Camp during World War II. This first biography of the "Father of Japanese-American Baseball" delivers a thorough and fascinating account of Zenimura's life.
Posted by Roberto Baly at 7:30 AM