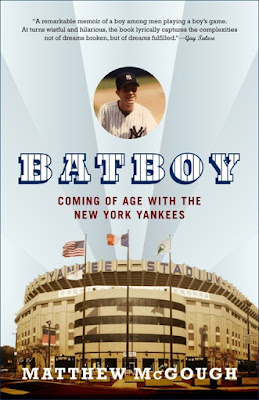 The Baseball Reliquary and Pasadena Public Library are pleased to host a discussion and book signing with Matthew McGough on Saturday, March 24, at 1:00 pm, at the Allendale Branch Library, 1130 S. Marengo Ave., Pasadena. McGough will discuss "Bat Boy: Coming of Age with the New York Yankees," a memoir of his teenage days in the Bronx and his two years as a bat boy with the Yankees in 1992-1993. The book is a witty and entertaining look at the inner world of baseball.

Matthew McGough is an author, journalist, and screenwriter. After leaving New York for Los Angeles, he was hired as a legal consultant and writer for NBC's television series, "Law & Order." His true crime account, "The Lazarus File," published in the June 2011 issue of The Atlantic magazine, was named by Longform.org to its list of the Best Crime Writing of 2011. The story was a gripping account of a cold-case investigation into the brutal killing of a nurse in 1986 and the improbable developments that led to the arrest of former LAPD detective Stephanie Lazarus. (Just a week ago, Lazarus was found guilty of first degree murder for the killing.) McGough's latest piece of journalism, a history of the LAPD's Cold Case Homicide Unit, appeared in the November-December 2011 issue of Miller-McCune magazine.
Posted by Roberto Baly at 6:30 AM