Baby is back home

The last time I used my laptop was Sunday evening. It's Thursday morning and surfing online seems a bit weird. I have missed blogging and exchanging emails with buddies to determine if Juan Uribe can do damage in the baseball field instead of the kitchen table.

Let me start from the beginning...

Last Friday, my eight month son slept all day. He literally slept all day. I had to wake him up just to eat. That's not normal. Not to toot my own horn, but my son is a happy, loving, well-behaved baby. He rarely cries and most of the time, he's a good baby. Oh, and he's never been sick. Never. I got lucky with him. But this past weekend, he was serious and barely got a fever Friday night.

On Saturday, he was doing good. No fever but noticed he was still serious and looked tired. We even went out in the evening to eat since it was my mother in law's birthday. Everything went smooth that night. We just thought he was catching a cold.

I already had plans on Sunday morning and I was only going to go if my son was doing good. He was coughing but no fever. I left the house hoping he will be fine with my wife. I went out to get a autograph of a mediocre baseball player from the 60's. Maybe I'll blog about that later. I shouldn't though. I'm not happy with myself on what I did that morning. Nothing illegal but still, not happy.

When I returned Sunday afternoon, my son was still sleeping and coughing. He didn't have a fever but I was getting nervous. I believe this is when he started breathing weird. Making some odd noises. I was getting concerned and was going to call his doctor the next morning to make an appointment. The night was fine. We watched the Oscars together and then in the middle of the show, Ned Colletti is shown in my TV screen clapping. My son got scared and quickly went to sleep. I went to Twitter to find out what Colletti was doing.

On Monday morning around 5am, my wife is getting ready to leave to work. My son is not doing good. He keeps making that weird noise while breathing. I gave him his milk and he didn't finish it. My son loves milk. I didn't like it that he didn't finish it. When trying to cry, I noticed he couldn't scream. I decided to take him to the emergency room. There's a hospital three blocks away from my house.

This hospital doesn't have a pediatric clinic. He would be seen by the doctors but most likely be transferred to a different hospital if he doesn't improve.  He was diagnosed with Croup and Influenza A. It's often to get Influenza but Croup? That's more serious and the hospital staff told me it was a good idea to bring him in.

Not happy in the hospital....

What's Croup? I got this info from a print out that a nurse gave me.

Croup is an illness that causes swelling of the airway just below the vocal cords. It is common in infants and children from three months to three years older. Children usually outgrow croup by the age of five, but older children may get croup. It usually starts with a cold and sore throat. Your child may have a harsh, barking cough and have trouble breathing. He may have problems swallowing or not be able to sleep.
Your child may suddenly have trouble breathing. This is called a croup attack. Croup attacks can happen anytime but usually occur during the cold weather season of late fall and winter. Attacks often happen at night and may last several days. Most children with croup can be treated at home. Some children with bad breathing problems may need to go into the hospital.

Reading this got me more nervous. I was more concerned when he was not improving in the E.R. and was told that we will be transferred to another hospital by ambulance. This is when I went on Twitter/Facebook and asked you to pray for my little baby. Many of you responded and hoped for the best. Thank you for your well wishes and prayers. You're too kind.

I was crying inside the ambulance. My son seems to enjoy the ride though.

At this hospital, my son was going through breathing treatments every four hours and also received antibiotics throughout the day. You can tell this is helping him since he was more active and smiling.

We still had to stay in the hospital for a few days since breathing problems is a serious matter.

Baby being spoiled. He didn't want to sleep in his hospital crib at 2am. Wanted to be in my sofa. Who can blame him? That thing looked like a cage. 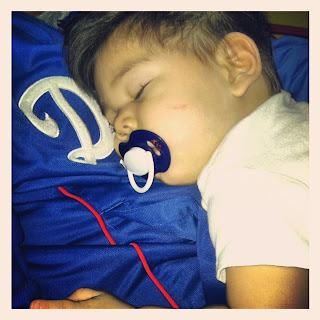 Playing with his favorite ball. 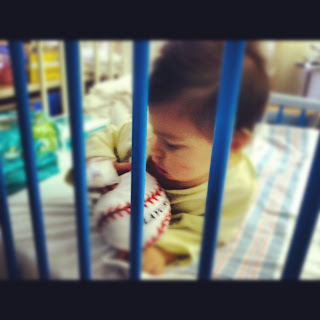 He was released from the hospital with the condition that he continues with his breathing treatment at home and takes his medicine. This will continue for a week and he needs to see his doctor next week to see how he's doing.

I had plans to go to Camelback Ranch this weekend. Obviously that won't happen now. I'm looking at the calender and the St. Patrick's weekend looks like a great time to catch the Dodgers. We'll see. Right now I'm just hoping my baby gets better and then we can start planning on going to Spring Training. I really want to take him.

Thanks for reading. I'll be back blogging tomorrow. And once again, thank you for your well wishes and prayers. 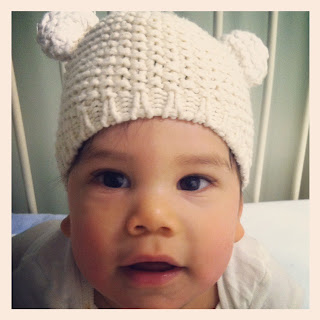 Thank God! You all will be in my prayers. Happy Baby = Happy Parents. :)

@ Jon - Thank you. Hopefully by next week he's back to his old self.

Very glad to hear the baby is on the road to recovery. Respiratory issues in babies and kids are really scary. I would have guessed he had RSV, which is common in babies and toddlers this time of year.

We're wishing you and your family the best and a full recovery for your baby Roberto. Be safe...Evan and Esperanza

glad to hear all i swell. wish u and your family the best

Good to hear your baby is doing better. I wish your baby a full speedy recovery.

glad to see you can post good news and things are improving. good luck and prayers to you and your family.

Went thru the same thing with my daughter many years ago - very scary! I was crying too! Glad he's better. The Dodgers can wait. Babies are more important. :)

Good to hear all is better.

My kids were both born early and I think that had something to do with them being more susceptible to illness in their first year. Luckily years 2 and up have been healthy.

I do remember the stress of the handful of urgent care and the one ER visit.

Nothing like the first couple of years - especially with the first child!

God bless you and your family.

My kiddos have had croup before and it s very scary. Great to hear that your little guy is doing better!