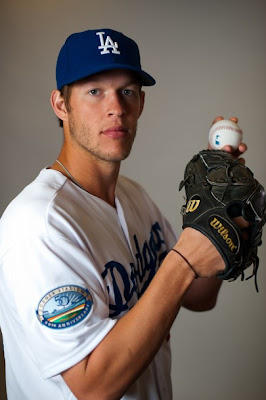 IN FOR A SURPRISE: The Dodgers will bus to Surprise today for their first of two meetings this spring with the two-time defending AL-champion Texas Rangers. The two clubs will have a rematch one week from today at Camelback Ranch – Glendale and haven’t met in the regular season since 2009, when the Dodgers took two of three in Arlington. Los Angeles holds an 11-9 advantage in their all-time meetings.

SHOWING THEIR ATHLETIC SIDE: Los Angeles rallied for two runs in the first inning off Oakland prospect Jarrod Parker and cruised to a 7-2 victory yesterday over the A’s at Camelback Ranch. Mark Ellis drove in two against his former teammates as did one-time Oakland prospect Andre Ethier, who continued his hot spring with his third extra-base hit in as many games (two doubles, home run). Chris Capuano struck out three in 2.0 scoreless innings in his Dodger debut and Todd Coffey fanned two in his 1-2-3 inning of relief after his signature sprint in from the bullpen.

LONE STAR LEFTY: Dallas native Clayton Kershaw makes his first official start of the spring against his hometown team today after striking out five in 2.0 innings in an intrasquad game on Sunday. Kershaw, who turns 24 on March 19, looks to continue his momentum from the end of last season after he went 8-0 with a 0.96 ERA (7 ER/65.2 IP) and a .192 opponents’ batting average over his last nine 2011 starts. The eight straight wins represent a career-long winning streak for the left-hander. The Highland Park High School graduate took home a number of awards last season, including a Rawlings Gold Glove and the NL Cy Young Award, but was also honored in his hometown by winning the Texas Professional Baseball Player of the Year Award for the second time in the last three years.

THE BULLPEN: RHP Ryan Tucker, a Burbank native, will get the chance to face his old teammates today after earning an American League Championship ring with Texas last season. The 25-year-old, who was selected by Florida with the 34th overall pick in the 2005 First-Year Player Draft, spent the entire 2011 season in the Ranger organization and appeared in five games with the big league club. In addition to Tucker, RHP Ronald Belisario, RHP Josh Wall, RHP Fernando Nieve, RHP Angel Guzman, LHP Scott Rice and LHP Matt Chico are expected to follow Kershaw to the mound this afternoon.

THIS IS YOUR CHANCE!: Major League Baseball has launched its fourth annual Honorary Bat Girl contest. Fans are encouraged to visit HonoraryBatGirl.com to submit stories online about how they, or someone they know, are “Going to Bat Against Breast Cancer” in their daily life and why they would like to be an "Honorary Bat Girl" for their favorite MLB Club this Mother’s Day. Nominations and voting end on April 5, so log on today and make someone’s dream come true.

IT’S GETTING CLOSER: The 3rd annual Dodgertown Classic is just four days away and will take place on Tuesday, March 13 at Dodger Stadium with UC Irvine taking on Pepperdine at 2:00 p.m. and USC battling their crosstown rival UCLA at 6:30 p.m. There will be discounted concessions and free parking with an all-day ticket costing only $7 in advance and $12 on gameday.

DRESS TO IMPRESS: The Dodgers will host the 17th annual Community Job Fair tomorrow at 10:00 a.m. at Dodger Stadium. Last year, more than 3,600 people found employment at the free event, which features more than 100 companies. Applicants are encouraged to wear appropriate business attire, bring copies of their resume and  visit LACommunityJobFair.com for more information.

GONE CAMPING: The Dodgers Dream Foundation will host two four-day sessions of the Dodgers Youth Baseball Camp this summer at Dodger Stadium. All campers will be instructed by members of the Dodgers Major League coaching staff, as well as Dodger Alumni, on the finer points of baseball, from hitting, running, fielding and throwing. During camp current Dodger players will visit to talk on a number of topics including the importance of school, sportsmanship and what it is like to be a professional baseball player. Session 1 will be held July 12, 13, 16 & 17 and Session 2 will be held August 3, 6, 7 & 8. Camp is open for boys & girls ages 7 - 12 years old. Limited spots are available, register today at www.dodgers.com/camp.
Posted by Roberto Baly at 11:30 AM