Game coming up at 12pm. See it on Prime Ticket. 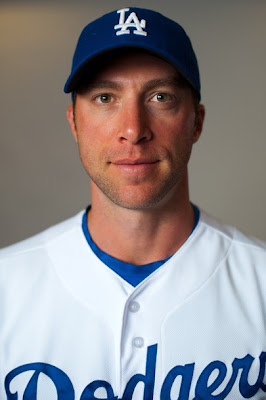 YOU’RE GOING TO HOLLYWOOD: This morning was the annual “Dodger Idol” competition at camp during which the players in their first Major League camp perform a musical number for the amusement of their teammates and staff. The details are under lock and key, but the participants were Nathan Eovaldi, Stephen Fife, Josh Wall, Chris Withrow, Alex Castellanos, Matt Wallach, Gorman Erickson, Will Savage and the winner, Scott Rice. Rice was the lone entertainer to perform an original music composition.

YOU AGAIN?: The Dodgers will take on the Oakland Athletics for the second straight day this afternoon after the two clubs tied 3-3 yesterday at Phoenix Municipal Stadium. The two clubs will also meet for a three-game Interleague series from June 19-21 at Oakland. The A’s have won 13 of 22 all-time regular season contests between the franchises with the California neighbors splitting their two World Series matchups in 1974 and 1988.

INSPIRATION: The Dodgers would like to welcome Cory Hahn and his father, Dale, to Camelback Ranch today. Hahn is a former Santa Ana Mater Dei High School star baseball player and won the 2010 Orange County player of the year award, before being drafted by the Padres in the 26th round of the 2010 draft. Hahn chose instead to attend Arizona State University, where in his third collegiate game he was paralyzed from the chest down after sliding headfirst into the second baseman’s knee on a stolen base attempt. Hahn was a guest of Dodger right fielder Andre Ethier and spoke to the entire team this morning

SETTLING NOTHING: The Dodgers and A’s played to a 3-3 tie yesterday in Aaron Harang’s spring debut. Harang allowed two runs over 2.0 innings, but Kenley Jansen, Javy Guerra, Scott Elbert, Alberto Castillo and Will Savage all fired scoreless innings and the club came back to even things up. At the plate, the Dodgers managed just four hits with three of them coming off the bat of left fielder Cory Sullivan, who went 3-for-4 with a double.

THE L.A. CC: Dodger left-hander Chris Capuano will make his official 2012 Cactus League debut this afternoon against Oakland. Capuano pitched 2.0 scoreless innings in an intrasquad game last Sunday on the minor league side. The Massachusetts native has limited left-handers to a .229 average over his nine-year Major League career, and won 11 games while working 186.0 innings last season for the New York Mets. Following Capuano to the mound will be RHP Stephen Fife, RHP Todd Coffey, RHP Matt Guerrier, RHP Mike MacDougal and LHP John Grabow. The Athletics will counter with RHP Jarrod Parker.

THIS IS YOUR CHANCE!: Yesterday, Major League Baseball launched its fourth annual Honorary Bat Girl contest. Fans are encouraged to visit HonoraryBatGirl.com to submit stories online about how they, or someone they know, are “Going to Bat Against Breast Cancer” in their daily life and why they would like to be an "Honorary Bat Girl" for their favorite MLB Club this Mother’s Day. Nominations and voting end on April 5, so log on today and make someone’s dream come true.

LEETCHY LEFTY: The Dodger roster will have two additions today and one is left-hander Brent Leach, who will wear No. 96 and suit up for the squad. Leach pitched in Japan last season, but made his big league debut for the Dodgers in 2009. The Mississippi native appeared in 38 games that year, going 2-0 with a 5.75 ERA for Joe Torre’s club. The other addition is RHP Javier Solano, who will wear No. 91.

SEEING GREEN: The one Dodger most familiar with the Athletics, Mark Ellis, is in the starting lineup this afternoon after getting a scheduled off day yesterday. The 34-year-old played for the A’s from 2002-11 before a midseason trade to Colorado last year and is Oakland’s all-time leader in games played (1,021) and home runs (84) as a second baseman. Ellis also holds the second-best all-time fielding percentage as a second baseman (min. 750 games) with a .991 mark in 1,085 games at the position and has posted a fielding percentage of .990 or better in seven consecutive seasons.

GET ON THE BUS!: New for 2012, fans can ride a free trolley from the Westgate City Center to all Dodgers and White Sox games at Camelback Ranch – Glendale. The trolley stop is located on Westgate Boulevard right across from Yard House and drops off outside the ballpark. The trolley runs every 40 minutes starting at 11:00 a.m. with continuous service throughout and after the game.
Posted by Roberto Baly at 11:30 AM

Camelback Ranch was officially just under half capacity, but it looked like even less than that on a perfect 72 degree day.The autographs were flowing. Dodgers beat the A's 7-2...Manny did not make 'the trip' for the A's.

Kershaw pitches today for the Dodgers against the Rangers in Surprise. Kershaw battling Josh Hamiliton and company ... mmm,mmm,good.