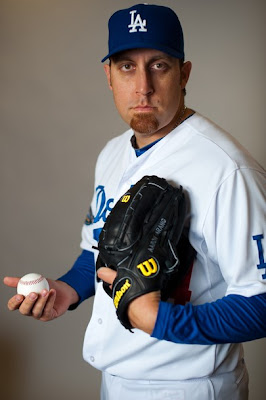 Notes from the Dodgers PR staff -

TAKING THIS SHOW ON THE ROAD: The Dodgers leave the friendly confines of Camelback Ranch – Glendale for the first time this spring as they travel to Phoenix Municipal Stadium to take on the Athletics. The two clubs will play again tomorrow in Glendale and will also meet for a three-game Interleague series from June 19-21 at Oakland. The A’s have won 13 of 22 all-time regular season contests between the franchises with the California neighbors splitting their two World Series matchups in 1974 and 1988.

A DOWNER: The Dodgers suffered their first defeat of the spring season yesterday as the Giants jumped on Ted Lilly early and beat Los Angeles 8-4 at Camelback Ranch – Glendale. Andre Ethier continued his hot start with a solo home run off Barry Zito to lead off the second inning and has two extra-base hits through his first four Cactus League at-bats. Jerry Hairston Jr. made his Dodger debut yesterday with a hit and an RBI and Juan Uribe reached base in both of his plate appearances in his first spring contest.

AARON IT OUT: Aaron Harang makes his Dodger debut this afternoon and is coming off one of the best seasons of his 10-year big league career after leading the Padres with 14 wins and posting a career-low 3.64 ERA in 28 starts last season. Since 2004, Harang ranks among the National League leaders in wins (85, 7th), strikeouts (1,223, 3rd), innings pitched (1,467.2, 4th) and complete games (13, T-7th). Harang will be followed to the hill today by RHP Chris Withrow, RHP Kenley Jansen, LHP Scott Elbert and RHP Javy Guerra.

NON-ROSTER SPOTLIGHT: Outfielder Cory Sullivan makes his first start of the Cactus League campaign today in left field and joins the Dodgers after spending the 2011 season with the Phillies’ Triple-A affiliate in Lehigh Valley, PA. The 32-year-old has appeared at all three outfield positions over the course of his big league career, posting a .994 fielding percentage, and has not committed an error at any level since 2008. Sullivan has a .271 career batting average with 10 homers and 97 RBI in 476 games in five Major League seasons with Colorado (2005-08), New York-NL (2009) and Houston (2010).

HIGH NUMBERS: The Dodger roster will be augmented today with a pair of right-handers from minor league camp with Francisco Felix (#87) and Shawn Tolleson (#92) making the trip to Phoenix Municipal Stadium. Tolleson was the organization’s Branch Rickey Minor League Pitcher of the Year last season, going a combined 7-2 with 25 saves and a 1.17 ERA in 57 relief appearances with Single-A Great Lakes, Single-A Rancho Cucamonga and Double-A Chattanooga. The 24-year-old averaged 13.7 strikeouts per 9.0 innings across all levels in 2011 (105 SO/69.0 IP) and held opposing hitters to a .206 batting average.

HE’S ATHLETIC: The one Dodger most familiar with the Athletics, Mark Ellis, is getting a scheduled off day after starting the club’s first two spring contests at second base. The 34-year-old played for the A’s from 2002-11 before a midseason trade to Colorado last year and is Oakland’s all-time leader in games played (1,021) and home runs (84) as a second baseman. Ellis also holds the second-best all-time fielding percentage as a second baseman (min. 750 games) with a .991 mark in 1,085 games at the position and has posted a fielding percentage of .990 or better in seven consecutive seasons.

FATHER’S DAY: The Dodgers have seven players in big league camp whose fathers played in the Majors with three cracking the starting lineup today. Jerry Hairston Jr. will start at shortstop, Tony Gwynn Jr. in center field and Ivan De Jesus will serve as the designated hitter. Also making the trip to Phoenix and hoping to see action this afternoon will be Justin Sellers, whose father Jeff pitched for the Red Sox, Scott Van Slyke, son of three-time All-Star Andy, and Matt Wallach, the son of Dodger Third Base Coach Tim. Dee Gordon, son of Tom “Flash” Gordon, will remain in Glendale this afternoon after starting both of the Dodgers’ first two Cactus League contests at shortstop.

GET ON THE BUS!: New for 2012, fans can ride a free trolley from the Westgate City Center to all Dodgers and White Sox games at Camelback Ranch – Glendale. The trolley stop is located on Westgate Boulevard right across from Yard House and drops off outside the ballpark. The trolley runs every 40 minutes starting at 11:00 a.m. with continuous service throughout and after the game.
Posted by Roberto Baly at 11:30 AM