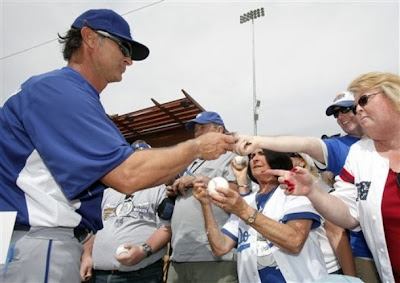 Notes from the Dodgers PR staff -

CITY BY THE BAY: The Dodgers meet the Giants this afternoon, for the first of three matchups this spring with San Francisco making a return trip to Camelback Ranch – Glendale on St. Patrick’s Day for a 7:05 p.m. start and Los Angeles heading to Scottsdale Stadium on Wednesday, March 28. During the regular season, the Giants and Dodgers clash 18 times, with the first series coming from May 7-9 at Dodger Stadium. The clubs meet six times in September, including the final three games at Chavez Ravine from Oct. 1-3.

ONE DOWN, 195 TO GO: The Dodgers opened up their 31-game Cactus League slate yesterday with a 6-4 victory over the Chicago White Sox at Camelback Ranch – Glendale. Right-hander Chad Billingsley fired 2.0 scoreless innings and Angel Guzman (1-0) picked up the win after firing 1.1 scoreless frames. At the plate, Scott Van Slyke homered and drove in two while Josh Fields went 2-for-2 with a double. In the sixth inning, four sons of former Major Leaguers hit for the cycle as Van Slyke’s home run, Ivan De Jesus’ triple, Justin Sellers’ double and Tony Gwynn Jr.’s single completed the feat and made their dads proud. In addition to those four, the Dodgers also have three other sons of former big leaguers in camp this year in Dee Gordon, Matt Wallach and Jerry Hairston Jr.

RIGHT SAID TED: Ted Lilly will make his first start of the spring this afternoon as he gets set to start his 17th professional season and 14th as a big leaguer. Since 2007, Lilly has made 99 quality starts, which is tied with Cole Hamels and Bronson Arroyo for third in the National League over that time, trialing just the Giants’ Matt Cain (114) and Tim Lincecum (113). Lilly was very good over the final two months of the season in 2011, winning five of his last six starts and posting a 2.09 ERA (16 ER/69.0 IP) over his last 11 outings from Aug. 3-Sept. 28. Lilly will be followed to the hill today by RHP Jamey Wright, LHP Michael Antonini, RHP Ramon Troncoso and RHP Josh Lindblom. The Giants will counter with left-hander Barry Zito.

TRAVELING BAND: The first five players in the Dodger batting order remain the same as yesterday, but today will mark the 2012 spring debuts for third baseman Juan Uribe, first baseman Jerry Sands, catcher Matt Treanor and designated hitter Jerry Hairston Jr. Treanor and Hairston will make their Dodger debuts today and both players are fairly well traveled. Treanor was drafted by the Kansas City Royals (1994), traded to Florida (1997), signed by Detroit (2008), moved over to Milwaukee (2009), was dealt to Texas (2010), reacquired by Kansas City (2011) and then skipped back to Texas (2011), before signing with the Dodgers. Hairston was drafted by the Orioles (1997), traded to the Cubs (2005), dealt to the Rangers (2006), signed by the Reds (2008), acquired by the Yankees where he won a World Series (2009) and then signed by the Nationals (2010), before being dealt to the Brewers (2011). If you’re keeping track, that’s 13 teams, eight trades, 10 free-agent signings and 24 seasons.

DESERT PENGUIN: The Dodgers would like to welcome Ron Cey to Camelback Ranch – Glendale! Cey will be visiting with Dodger players and team sponsors during his stay in Phoenix this week and will be featured on a bobblehead with the rest of “The Infield” on May 29 against the Brewers. Single-game tickets are on sale now or fans can purchase the Dodger Stadium Greats Bobblehead Series mini plan to ensure seats to all 10 bobblehead nights this season by visiting Dodgers.com/miniplans.

BEST WISHES SWEEN: Yesterday, the Dodgers announced that Special Assistant, Baseball Operations, Mark Sweeney will leave the organization to pursue an opportunity in his hometown of San Diego. Sweeney spent three seasons in the Dodgers’ front office after finishing out his playing career with the club in 2008.

IN JUST 30 SHORT DAYS: The Dodgers will open the 2012 Championship Season just 30 days from today at 4:05 p.m. against the Padres at San Diego’s PETCO Park. Clayton Kershaw will be on the hill for his second consecutive Opening Day start and will become the first reigning Cy Young Award winner to make an Opening Day start for Los Angeles since Sandy Koufax in 1964. He will be the first Dodger to make consecutive starts in a season opener since Derek Lowe from 2005-07. Kershaw, who turns 24 on March 19, had his first tuneup of the spring Sunday, striking out five of the seven batters he faced and allowing just one hit over 25 pitches, and will make his first official Cactus League start on March 9 against the Rangers in Surprise.

TROLLEY DODGERS: New for 2012, fans can ride a free trolley from the Westgate City Center to all Dodgers and White Sox games at Camelback Ranch – Glendale. The trolley stop is located on Westgate Boulevard right across from Yard House and drops off outside the ballpark. The trolley runs every 40 minutes starting at 11:00 a.m. with continuous service throughout and after the game.
Posted by Roberto Baly at 12:00 PM