A few days left in Arizona.... 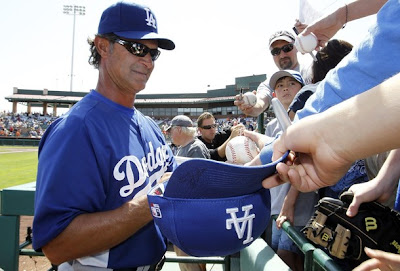 SPLITSVILLE: The Dodgers will play two games this afternoon with split-squads battling the Brewers at Camelback Ranch and the Cubs on the road in Mesa. Los Angeles and Milwaukee split their previous two meetings this spring with the Dodgers winning 7-6 on March 20 in Glendale and losing 7-1 on Sunday in Maryvale. The Dodgers lost the season series 2-4 to Milwaukee last season and the clubs will get their matchups underway early in the 2012 campaign with meetings from April 17-19 at Miller Park and May 29-31 at Dodger Stadium.

HURLERS: LHP Chris Capuano will make his fifth Cactus League start this afternoon after allowing two runs in 5.0 innings in his last outing on Saturday against the Indians. The 33-year-old spent seven seasons in the Milwaukee organization from 2004-10, going 44-48 with a 4.34 ERA in 139 games (120 starts) with the Brew Crew. Capuano is 1-1 with a 3.29 ERA this spring and has limited opposing hitters to a .231 batting average (12-for-52) with 15 strikeouts in 13.2 innings. He will be followed to the hill by:

● RHP Jamey Wright will tie Josh Lindblom for the team lead with his ninth appearance of the spring today after allowing one run in 1.0 inning on Tuesday against the Padres in a spot start. That same day, the 37-year-old had his contract selected by the Dodgers and was added to the club’s 40-man roster, essentially making the club as a non-roster invitee.

● RHP Todd Coffey has seen his ERA balloon to 8.53 after allowing a two-run homer in his 1.0 inning of work on Wednesday against the Giants and has allowed runs in three of his last four appearances. Coffey pitched three seasons in Milwaukee from 2008-10 before spending last season in Washington and went 7-8 with a 3.52 ERA in 156 games with the Brewers.

● RHP Matt Guerrier will make his third appearance of the spring after a back injury kept him off the mound since his last appearance on March 11 against the Cubs.

ROSTER UPDATE: Following yesterday’s game, the Dodgers released non-roster invitees OF Cory Sullivan (.289 batting average in 22 games) and C Josh Bard (.111 average in 14 games) from their minor league contracts. There are currently 37 players remaining in Major League camp, including Rubby De La Rosa and Blake Hawksworth, who are on the 60-day disabled list.

THREE DOWN: The Dodgers lost their third consecutive game yesterday, falling 3-1 to the White Sox. Juan Uribe posted his second multi-hit game of the spring, going 2-for-3, and A.J. Ellis drove in Los Angeles’ only run of the game with a sacrifice fly in the fifth. Aaron Harang continued to impress in his fifth Cactus League start, allowing just one run and striking out six in 6.0 solid innings.

FOLLOW THE LEADERS: Dee Gordon (six games) and Andre Ethier (eight games) both had their hitting streaks snapped yesterday, but have been two of Los Angeles’ hottest hitters this spring. Gordon ranks among the NL leaders in batting average (.385, 5th), steals (10, 2nd), runs (13, T-3rd) and on-base percentage (.458, 6th). Ethier is tied for the league lead with eight doubles and three triples, is tied for fifth with 36 totals bases and leads the Dodgers in average (.390) and slugging percentage (.878).

WHO’S READY!: The 2012 regular season kicks off for the Dodgers in just six days in San Diego and the Dodger Stadium 50th anniversary season begins in 11 days. The Dodgers’ home opener against the Pirates has sold out, but a limited number of seats for the big day are available through the purchase of Full Season, 25-game Pick ‘Em and 15-game Mini Plan packages.

SING FOR THE FENCES: The Dodgers will hold Red, White and Dodger Blue National Anthem Auditions tomorrow starting at 9:00 a.m. at Dodger Stadium to select performers to sing the “Star-Spangled Banner” at home games this season. One participant will be selected to sing the national anthem at the Dodgers’ first home game in Los Angeles, as they take on the Angels next Tuesday, April 3. Interested performers can find more information and download the participant waiver at Dodgers.com/Anthem.

LEAVE THE LIGHT ON: The Dodgers will pack up and leave Arizona for Southern California following Sunday’s game against the Diamondbacks at Camelback Ranch – Glendale. The Freeway Series against the Angels gets underway on Monday night in Anaheim (7:05 p.m.) with games on Tuesday night (7:10 p.m.) and Wednesday afternoon (12:10 p.m.) at Dodger Stadium. Fans can get their first in-person look at the 2012 Dodgers by visiting Dodgers.com or calling 866-DODGERS.

IN THE NEWS…: It was announced Tuesday night that the Los Angeles Dodgers and Frank McCourt reached an agreement under which Guggenheim Baseball Management LLC will acquire the Los Angeles Dodgers for $2 billion upon completion of the closing process. The purchasing group includes Mark R. Walter as its controlling partner, as well as Earvin “Magic” Johnson, Peter Guber, Stan Kasten, Bobby Patton and Todd Boehly