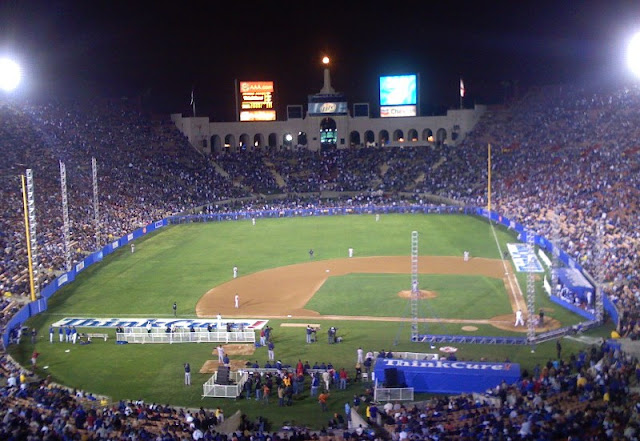 GET OUT THE BROOMS?: The Dodgers and White Sox complete their five-game Cactus League series with an afternoon tilt at Camelback Ranch – Glendale today. The Dodgers have won all four contests, including a 17-4 victory in in Tucson that benefitted the Christina-Taylor Green Memorial Foundation. Los Angeles has outscored its Glendale roommates 37-17 this spring. The two squads will meet again during the regular season from June 15-17 at Dodger Stadium.

HURLERS: Dodger right-hander Aaron Harang will make his fifth start of the spring this afternoon and is 1-1 with a 3.86 ERA (6 ER/14.0 IP) in his first Spring Training with the Dodgers. The 6-7, 230-pound Harang last pitched on Friday in Surprise against the Royals and gave up just one run over 5.0 innings. The San Diego native and resident is coming off one of the best seasons of his 10-year big league career after leading the Padres with 14 wins and posting a career-low 3.64 ERA in 28 starts last season. Since 2004, Harang ranks among the National League leaders in wins (85, 7th), strikeouts (1,223, 3rd), innings pitched (1,467.2, 4th) and complete games (13, T-7th). He will be followed to the mound by:

● RHP Josh Lindblom will make his team-leading ninth appearance of the Cactus League season today. Thus far, Lindblom has a 4.00 ERA (4 ER/9.0 IP) this month and has struck out seven batters without a walk. The right-hander out of Purdue went 1-0 with a 2.73 ERA (9 ER/29.2 IP) in 27 appearances for the Dodgers last year.

● RHP Ronald Belisario will make his sixth appearance this spring. The native of Venezuela has allowed five runs in 6.0 innings in March.

● LHP Scott Rice tossed a scoreless inning on Tuesday in Peoria and now has a 4.05 ERA (3 ER/6.2 IP) to go along with seven strikeouts and just one walk. The 30-year-old non-roster invitee is looking to make the Major Leagues for the first time in his 14-year professional career.

THIS FEELS FUNNY: The Dodgers have lost two-in-a-row for the first time all spring following yesterday’s 4-1 loss to the Giants. Nathan Eovaldi started and allowed two runs on three hits over 5.0 innings while Kenley Jansen and Mike MacDougal each tossed 1.0 scoreless inning of relief. At the plate, second baseman Mark Ellis went 2-for-3 with a runs scored and a walk while James Loney went 2-for-4 with two extra-base hits and the club’s lone RBI.

A CHANGE IS GONNA COME: It was announced Tuesday night that the Los Angeles Dodgers and Frank McCourt reached an agreement under which Guggenheim Baseball Management LLC will acquire the Los Angeles Dodgers for $2 billion upon completion of the closing process. The purchasing group includes Mark R. Walter as its controlling partner, as well as Earvin “Magic” Johnson, Peter Guber, Stan Kasten, Bobby Patton and Todd Boehly.

LET’S HAVE A PARTY: The 2012 regular season kicks off in just one week and the Dodger Stadium 50th anniversary season begins in 12 days. Yesterday, the Dodgers announced that Opening Day against the Pirates has sold out but a limited number of seats for the big day are available through the purchase of Full Season, 25-game Pick ‘Em and 15-game Mini Plan packages.

THE BIG BATS: The Dodgers’ .282 team batting average ranks third among National League teams this spring and all three of the club’s starting outfielders are hitting over .300. Andre Ethier’s current eight-game hitting streak has given him a team-leading batting average of .421 while Matt Kemp (.313) and Juan Rivera (.304) rank sixth and seventh on the squad, respectively. Rivera is tied for fourth in home runs with four and Ethier ranks among the leaders in doubles (8, T-1st), total bases (36, T-4th), triples (3, T-1st) and runs scored (11, T-7th).

MY GOODNESS, MY GUINNESS: On this date four years ago, a Guinness World Record 115,300 fans watched the Dodgers and Red Sox play in an exhibition game at the Los Angeles Memorial Coliseum that raised more than $2 million for ThinkCure!, the club’s official charity.

FROM PEORIA TO PEORIA: Dodger broadcaster Charley Steiner will deliver the opening keynote address tonight at the Fifth Summit on Communication and Sport hosted by his alma mater, Bradley University. Steiner has been active in the Bradley community following his graduation in 1971, earning an induction into the school’s Sports Hall of Fame in 1995, establishing the Charles H. Steiner Endowed Scholarship for broadcasting majors and receiving an honorary Doctor of Humane Letters and delivering mid-year commencement address at Bradley in December 2010.
Posted by Roberto Baly at 11:30 AM