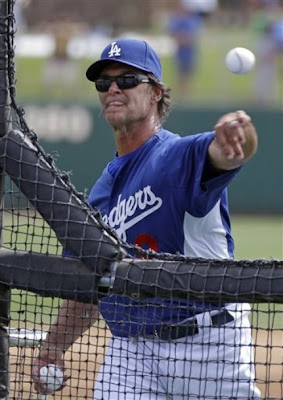 
ONE-UP THE NEIGHBORS: The Dodgers will square off with the Chicago White Sox for the fourth time this spring and, so far, it has been all Dodgers. Los Angeles is 3-0 against Chicago this spring, including Friday’s 17-4 victory in Tucson. The Dodgers will play the White Sox for the final time this March on Thursday, but the two squads will meet again during the regular season from June 15-17 at Dodger Stadium.

SPRING WORKHORSE: Dodger starter Chad Billingsley will make his team-leading fifth start of the Cactus League slate this afternoon and thus far owns a record of 0-0 and a 4.97 ERA (7 ER/12.2 IP). The Ohio native’s last outing was Tuesday, March 20 against the Brewers, when he gave up three runs over 4.2 innings. All five of Billingsley’s starts have been at Camelback Ranch. He’ll be followed to the mound by:

● LHP Scott Elbert has allowed runs in two consecutive outings, which has ballooned his spring ERA to 5.40 (3 ER/5.0 IP). Today will mark his sixth appearance this month. Last year, Elbert limited lefthanders to a .191 batting average (13-for-68) and no home runs.

● RHP Javy Guerra will make his first appearance since firing a scoreless inning on Friday in Surprise. Guerra has allowed just one run (a solo homer) in five outings this spring (1.93 ERA). The Texas native has held the opposition to a .188 (3-for-16) batting average this spring.

● RHP Ronald Belisario was reinstated from the restricted list and placed back on the 40-man roster Thursday. The native of Venezuela has allowed three runs in 4.0 innings this spring, but tossed a scoreless inning in his last Cactus League outing on March 17.

● RHP Jamey Wright will tie Josh Lindblom this afternoon for the most games by a pitcher this spring with seven. The 17-year veteran hurler and non-roster invitee has posted a 2.25 ERA (2 ER/8.0 IP) and last pitched on Saturday vs. Cleveland, when he recorded the save with a perfect ninth inning.

NOT-SO MARYVALE: Yesterday, the Dodgers were held to three hits and fell to the Brewers in Maryvale, 7-1. Dodger starter Clayton Kershaw took the loss, dropping his spring record to 2-2. The left-hander allowed just two runs over 6.0 innings and his Cactus League ERA is now 1.47. At the plate, Cory Sullivan went 1-for-1 and Jerry Hairston Jr. was 2-for-3, raising his spring average to .357.

DOUBLE TROUBLE: Dodger outfielder Andre Ethier has seven doubles on the spring season, tying him with Pittsburgh’s Josh Harrison and Cincinnati’s Zack Cozart for the National League lead. His 30 total bases are tied for eighth among National Leaguers and his 10 RBI lead the team and are tied for 10th in the NL.

HAPPY HAPPY: The Dodgers would like to wish a very happy birthday to Special Assistant, Baseball Operations Jose Vizcaino. “Vizzy” turns 44 today and is beginning his fifth season in the Dodger front office, following an 18-year playing career that started when he was signed by the Dodgers at 17. Vizcaino’s game-winning single for the Yankees in the 12th inning of the 2000 World Series, ended the then longest World Series game in history.

SPEE-DEE: Dee Gordon went 2-for-3 with a stolen base and a run scored in Saturday’s win for his fourth consecutive multi-hit game. After getting the day off yesterday, Gordon will be back atop the Dodger lineup today and ranks among the National League leaders in batting average (.415, 3rd), runs scored (12, T-1st), steals (8, 2nd) and on-base percentage (.489, 3rd) in 15 games this spring.

GETTING OFFENSIVE: The Dodgers are 11-8-4 this spring, which is the fifth-best record in the Cactus League, and have been one of the National League’s best offensive teams despite their three-hit attack at Maryvale yesterday. Among National League squads, Los Angeles ranks fifth in team batting average (.282), third in on-base percentage (.353) and has posted the fifth-highest slugging percentage (.439). The Dodgers have also fared well on the mound with their 3.59 team ERA ranking fourth in the NL.

ON THE BACK FIELDS: Dodger reliever Matt Guerrier will toss an inning in a minor league contest vs. the Reds’ minor leaguers this afternoon. Guerrier has been hampered with a back injury and last pitched on March 11 vs. the Cubs. The Ohio native has made two appearances this spring without allowing a run or hit.

LEGENDS OF THE FALL: Prior to the game today, nine Dodger minor leaguers that played for the Arizona Fall League champion Salt River Rafters will receive their championship rings during a pregame ceremony.
Posted by Roberto Baly at 12:30 PM