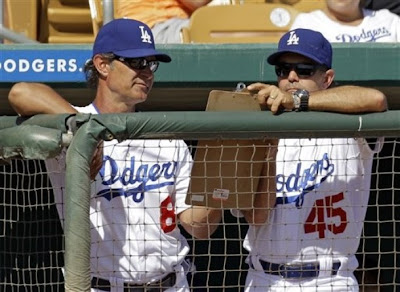 SUNDAY FUN DAY: The Dodgers and Angels will collide for the final time during 2012 Cactus League play this afternoon at  a sold out Camelback Ranch – Glendale, following the Dodgers’ blowout win at Tempe Diablo Stadium last Monday (9-1). However, the two Southern California squads will meet in an exhibition Freeway Series from April 2-4 and then during the regular season, the Dodgers and Halos will meet six times, starting with a three-game set at Dodger Stadium from June 11-13. In 2011, the Angels won the series, 4-2, taking two of three contests at both Dodger and Angel Stadium last summer.

HURLERS: Left-hander Chris Capuano takes the mound for his third start of the spring season today and is 1-1 with a 3.86 ERA (2 ER/4.2 IP) thus far. Capuano last pitched Tuesday vs. Colorado and allowed two runs in 2.2 innings. The Massachusetts native has been especially tough against left-handers over the course of his career, limiting them to a .229 batting average, a .290 on-base percentage and a .341 slugging percentage. Capuano will be followed to the mound by:

● RHP Mike MacDougal last pitched on Thursday vs. Kansas City and took the loss, allowing four earned runs in 0.1 innings. Last season, MacDougal was a key cog in the Dodgers’ bullpen, ranking second on the club with a career-high 69 appearances and posting a 2.05 ERA in 57.0 innings.

● LHP John Grabow tossed 1.2 scoreless innings on Thursday vs. Kansas City. The left-hander is looking to make the club as a non-roster invitee and thus far has fired 3.2 scoreless frames while limiting hitters to a .231 average.

● RHP Angel Guzman tossed 1.0 scoreless inning on Thursday and has yet to give up a run in 4.1 innings of work. The native of Venezuela is limiting the opposition to a .071 batting average this spring.

● LHP Wilfredo Ledezma worked a scoreless frame on Friday vs. Texas, lowering his spring ERA to 2.08 (1 ER/4.1 IP) in four appearances. Batters are hitting just .141 against him.

GRAY BEARDS: Believe it or not, the longest tenured Dodgers are first baseman James Loney and right fielder Andre Ethier. Loney made his debut for the Dodgers on Opening Day 2006 and Ethier was called up May 2, 2006. When it comes to service time with the club, All-Star outfielders Ethier (5.153) and Matt Kemp (5.049) as well as starter Chad Billingsley (5.110) all trump Loney (5.012), the club’s first round draft pick in 2002. The old guys aren’t doing so bad this spring as Ethier leads all National Leaguers with six doubles and is tied for seventh with 20 total bases. Ethier’s .474 average (9-for-19) leads the club, but Loney isn’t far behind, batting .353 (6-for-17) in just seven games.

HOLDING STEADY: The Dodgers enter today’s contest with the second-best Spring Training record among National League clubs at 8-4-3, trailing just the Giants (11-4-3).  Los Angeles also owns the third-best team ERA among NL clubs with a 3.41 mark and the second-highest team batting average at .289.

HALL OF FAME SUNDAY: For the second consecutive game, Dodger fans can hear Hall of Fame broadcasters Vin Scully and Jaime Jarrín calling games on KCAL 9 and KTNQ, respectively. Scully is entering his 63rd year with the club and Jarrín will be behind the microphone for his 54th season in 2012.

TUNED IN: The Dodgers announced their 2012 regular season broadcast schedule yesterday with approximately two-thirds of their television games on PRIME TICKET, one-third on KCAL 9 and all games on Dodgers Radio AM 570 Fox Sports Los Angeles and Univision Radio’s KTNQ 1020. Los Angeles’ first game (April 5 at San Diego) and home opener (April 10 vs. Pittsburgh) will both be televised on PRIME TICKET with the network’s preview special airing on March 28 at 10:30 p.m.
Posted by Roberto Baly at 12:00 PM