Don Newcombe to work with pitchers at Camelback Ranch. 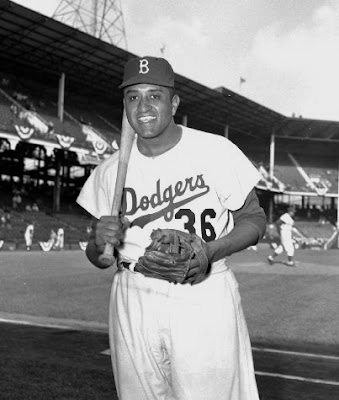 FEELING BLUE: The Cactus League-leading Dodgers play the Royals this afternoon for the first time this spring with the teams meeting again in Surprise on March 23. Los Angeles and Kansas City haven’t met in the regular season since 2005, with the Royals holding a 4-2 advantage in the all-time series. While the Dodgers won’t be heading to KC in 2012, members of the Blue Crew have their sights set on Kauffman Stadium and an All-Star selection for the Midsummer Classic on July 10.

HILLTOPPERS: Chad Billingsley makes his third start of the spring after allowing three runs on six hits in 2.1 innings on Saturday night against the White Sox. The Dodgers will forgo the designated hitter for the first time this spring today with Billingsley batting ninth in the Los Angeles lineup. Last season, the 27-year-old ranked fifth among pitchers with a .268 slugging percentage and tied for fifth with three doubles. Billingsley will be followed to the mound by:

● RHP Mike MacDougal allowed one hit in a scoreless inning on Sunday against the Cubs and has tossed 2.0 scoreless frames this spring. MacDougal re-signed with Los Angeles as a free agent and ranked seventh among NL relievers with a 2.05 ERA last season.

● RHP Todd Coffey last pitched on Sunday against the Cubs, striking out one in a scoreless inning. Coffey has not allowed a baserunner in his two appearances this spring and has struck out three of the six batters he’s faced.

● LHP John Grabow allowed two hits in his last appearance against Chicago-NL on Sunday, but escaped the 1.0 inning without any damage. He’s tossed 2.0 scoreless frames this spring after signing a minor league contract with the Dodgers this past offseason after three seasons with the Cubs.

● LHP Alberto Castillo has limited opponents to a .143 batting average (1-for-7) in his two Cactus League appearances this spring. He fired a scoreless inning on Sunday against the Cubs in his most recent outing.

RED HOT: Clayton Kershaw improved to 2-0 and struck out six in his 4.0 scoreless innings last night as Los Angeles defeated the Reds 9-1 in Goodyear. A.J. Ellis and Adam Kennedy launched their first home runs of the spring season and Trent Oeltjen came within inches of an inside-the-park home run, but had to settle for a two-run triple when he was tagged out at home plate by the immovable Cincinnati catcher Devin Mesoraco. The Reds’ only run of the night was unearned in the fifth inning against Jamey Wright and Josh Lindblom, Josh Wall, Michael Antonini and Will Savage each fired a scoreless inning in relief.

FROM THE REDS TO THE RED CARPET: National League Cy Young Award winner Clayton Kershaw will be presented with the 2011 Sportsman of the Year award tonight at the seventh annual LA Sports Awards, which are held annually by the Los Angeles Sports Council to celebrate the greatest moments of the year in sports in the Los Angeles/Orange County area. The Sportsman award is given to the local male athlete whose performance and character best exemplified the ideals of sportsmanship during the calendar year. Kershaw will leave camp to fly back to Los Angeles for the event and will be available to the media at Club Nokia in downtown Los Angeles at 5:45 p.m.

WELCOME, NEWK!: The Dodgers would like to welcome Special Advisor to the Chairman Don Newcombe to Camelback Ranch – Glendale. Newcombe, who is in town all weekend, will address both the Major and minor leaguers in camp and throw a ceremonial first pitch prior to the sold out Dodgers-Giants game on Saturday night.

ALL PHASES: The Dodgers have the National League’s lowest team ERA this spring with a 2.82 mark and rank fifth on the circuit with a .283 team batting average. Outfielder Cory Sullivan leads the club and ranks fifth among all National Leaguers with a .389 batting average. After last night’s victory, Clayton Kershaw is tied for the NL lead with two wins and a 0.00 ERA.

PRIME TIME: The Dodgers would also like to welcome Eric Collins to Camelback Ranch – Glendale. Collins enters his fourth season as a Dodger broadcaster and will call today’s game on PRIME TICKET alongside Steve Lyons.

MARATHONING FOR A CAUSE: Today, a group of student runners from the Tohoku region of Japan will enjoy a tour and lunch at Dodger Stadium before running the L.A. Marathon this weekend to raise funds to build an orphanage in Japan. The trip was arranged by the non-profit group Ashinaga and includes two high schoolers orphaned by the tsunami, six Japanese high school student runners, eight Japanese college runners, Ashinaga staff members, representatives of the Japan Amateur Athletic Association representing the Tohoku region and the group’s L.A. host families.
Posted by Roberto Baly at 12:30 PM