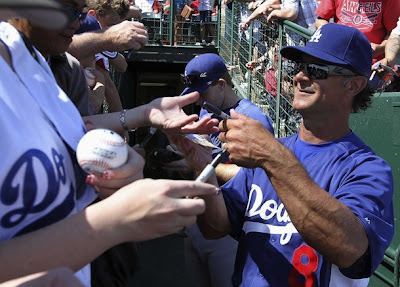 MOUNTAIN TOPPERS: The Dodgers enter today’s contest with Colorado sporting 6-1-2 record, which is tied with Detroit for the best Spring Training record in the Majors. Los Angeles is undefeated (5-0-2) in its last seven games and the Dodgers have outscored their opponents 14-1 in their last two contests. The Rockies and Dodgers will face off two times in a five-day period with a rematch on Saturday afternoon at Talking Stick after the clubs split their 18 meetings last year.

HE’S GOT MY CAP: LHP Chris Capuano makes his second Cactus League start this afternoon after striking out three and allowing just two hits in 2.0 scoreless innings in Thursday’s win against Oakland. In 11 career games (10 starts) against Colorado, Capuano has posted a 3.68 ERA and a .235 opponents’ batting average despite his 4-5 record. The 33-year-old has been especially tough against left-handers over the course of his career, limiting them to a .229 batting average, a .290 on-base percentage and a .341 slugging percentage. Capuano will be followed to the mound by:

● RHP Fernando Nieve, who last pitched on Friday at Texas and allowed just one hit and struck out one in 2.0 scoreless frames. The 29-year-old pitched for the Doosan Bears in Korea last season after opening the season with Houston’s Triple-A affiliate in Oklahoma City.

● RHP Stephen Fife, who last pitched on Thursday vs. Oakland and allowed one run on two hits in 2.0 innings of relief. Fife, 25, was acquired with Tim Federowicz and Juan Rodriguez from Boston at the 2011 trade deadline in exchange for Trayvon Robinson. He was originally selected by the Red Sox in the third round of the 2008 draft out of the Univ. of Utah.

● RHP Ramon Troncoso, who gave up two hits in a scoreless inning on Saturday at Seattle in his most recent outing and has allowed one run in 2.0 innings over his two Cactus League appearances this spring.

● RHP Ryan Tucker, who threw 2.0 scoreless innings on Friday at Texas against his former teammates after giving up two runs on March 5 against the White Sox in the Dodgers’ Cactus League opener.

ALL PHASES: The Dodgers have the National League’s lowest team ERA this spring with a 3.11 mark and rank third on the circuit with a .290 team batting average. Los Angeles also leads NL clubs with a .377 team on-base percentage and is tied for second with a .490 slugging percentage. In the field, the Dodgers have committed just three errors, tied with Houston for the fewest on the Senior Circuit.

DID I CATCH A NINER?: The Dodgers downed the Angels 9-1 yesterday as former Angel Juan Rivera drove in four runs, including a solo home run in the third inning, and Justin Sellers blasted a three-run homer in the sixth inning to put the game out of reach. Los Angeles starter Aaron Harang bounced back nicely from a rough first outing on March 7 against Oakland to limit the hot-hitting Angels to just one run in 3.0 innings and the Dodger bullpen of Angel Guzman, Chris Withrow, Wilfredo Ledezma and Scott Rice combined to blank the Halos in the final 6.0 frames.

BE THERE: Gates open for the 3rd annual Dodgertown Classic presented by Coca-Cola at 1:00 p.m. today for the two great local matchups of UC Irvine vs. Pepperdine at 2:00 p.m. and USC vs. UCLA at 6:30 p.m. There will be discounted concessions and free parking with an all-day ticket costing only $12 for the event.

JUAN GONE!: Juan Rivera slugged a solo shot off the Angels’ Aaron Taylor in the third inning yesterday for his third home run in as many games and has an .875 slugging percentage this spring with all four of his hits (three homers and one double) going for extra bases. Rivera, who re-signed with the Dodgers as a free agent during the offseason, is tied for second among National Leaguers in home runs and would rank second in slugging percentage if he had enough at-bats to qualify.

WITH HEAVY HEARTS…: The Dodger family would like to offer its condolences to the family of Dorothy Walton Reese, who passed away on March 7 at the age of 89. Reese was married to Dodger Hall of Famer Pee Wee Reese for 57 years before his death on Aug. 14, 1999 and is survived by a daughter, Barbara Reese Dudgeon, and a son, Mark Allen Reese.

HOT OFF THE PRESSES: As part of the 50th Anniversary of Dodger Stadium presented by State Farm, which will be celebrated throughout the 2012 season, the Dodgers have created an official illustrated history coffee table book for the first time in franchise history. The book recalls the franchise’s rich and storied past and is entitled “Dodgers: From Coast to Coast - The Official Visual History of the Dodgers.”  “Dodgers: From Coast to Coast” will be released on Opening Day, April 10, as the Dodgers open at home against the Pittsburgh Pirates at 1:10 p.m. It will be available for purchase at Dodger Stadium merchandise locations and online at www.dodgers.com/book for $40.
Posted by Roberto Baly at 12:00 PM