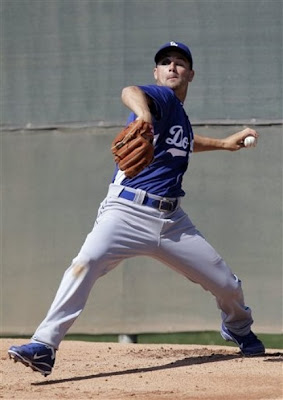 RED HOT AND BLUE: The Dodgers take their Cactus-League best 5-1-2 record to Tempe’s Diablo Stadium this afternoon to take on their I-5 rivals, the Angels. The two teams will meet again in Cactus League action on March 18 at Camelback Ranch –Glendale, prior to their exhibition Freeway Series from April 2-4. During the regular season, the Dodgers and Halos will meet six times, starting with a three-game set at Dodger Stadium from June 11-13. With four wins and a tie in its last five games, the Dodgers have the Cactus League’s best record with a 5-1-2 mark through eight contests. The club also has the best record among National League squads and trails only the Tigers (6-1-1) for the Majors’ best mark so far in the spring season.

ALL PHASES: Los Angeles ranks fourth among National League teams with a .286 team batting average and is tied for third with 10 home runs, despite playing in just eight games. The Dodgers rank third among all NL clubs with a 3.38 ERA (27 ER/72.0 IP) and have committed just three errors, which ties them with the Cardinals and Astros for the fewest among NL teams.

THE BIG “H”: New Dodger starter Aaron Harang will make his second Cactus League appearance this afternoon in Tempe after making his debut last Wednesday in Phoenix against the A’s. Harang is coming off one of the best seasons of his 10-year big league career after leading the Padres with 14 wins and posting a career-low 3.64 ERA in 28 starts last season. Since 2004, Harang ranks among the National League leaders in wins (85, 7th), strikeouts (1,223, 3rd), innings pitched (1,467.2, 4th) and complete games (13, T-7th). The California native will be followed to the hill today by RHP Chris Withrow, LHP Wilfredo Ledezma, RHP Angel Guzman, RHP Ryan Tucker and LHP Scott Rice.

FAMILIAR FACES: Two players very familiar to Angels fans will be in the Dodger starting lineup today as Adam Kennedy starts at second and Juan Rivera will be in left field. Kennedy, who played in Anaheim from 2000-06, ranks among the Angels’ franchise leaders in games (992, 9th), hits (935, 13th), doubles (176, 9th) and triples (32, T-4th). He was the 2002 MVP of the American League Championship Series vs. Minnesota after hitting .357 (5-for-14) with three homers and five RBI in four games. Rivera played in Orange County from 2005-10, blasting 92 homers during that six-year stretch, which also includes the 2007 campaign when he played in just 14 games due to injury. The Venezuela native set career highs with the Angels in 2009 with 152 hits, 72 runs, 25 homers and 88 RBI.

HOT OFF THE PRESSES: As part of the 50th Anniversary of Dodger Stadium presented by State Farm, which will be celebrated throughout the 2012 season, the Dodgers have created an official illustrated history coffee table book for the first time in franchise history. The book recalls the franchise’s rich and storied past and is entitled “Dodgers: From Coast to Coast - The Official Visual History of the Dodgers.”  “Dodgers: From Coast to Coast” will be released on Opening Day, April 10, as the Dodgers open at home against the Pittsburgh Pirates at 1:10 p.m. It will be available for purchase at Dodger Stadium merchandise locations and online at www.dodgers.com/book for $40.

GOING TO BE A CLASSIC: The 3rd annual Dodgertown Classic will take place tomorrow, March 13, at Dodger Stadium with UC Irvine taking on Pepperdine at 2:00 p.m. and USC battling its crosstown rival, UCLA at 6:30 p.m. There will be discounted concessions and free parking with an all-day ticket costing only $7 in advance and $12 tomorrow.

GONE CAMPING: The Dodgers Dream Foundation will host two four-day sessions of the Dodgers Youth Baseball Camp this summer at Dodger Stadium. All campers will be instructed by members of the Dodgers Major League coaching staff, as well as Dodger Alumni, on the finer points of baseball, from hitting, running, fielding and throwing. During camp current Dodger players will visit to talk on a number of topics including the importance of school, sportsmanship and what it is like to be a professional baseball player. Session 1 will be held July 12, 13, 16 & 17 and Session 2 will be held August 3, 6, 7 & 8. Camp is open for boys & girls ages 7 - 12 years old. Limited spots are available, register today at www.dodgers.com/camp.
Posted by Roberto Baly at 11:00 AM