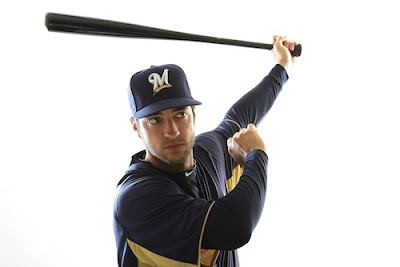 Big news! Ryan Braun has won his appeal and won't be suspended.

Milwaukee Brewers leftfielder Ryan Braun became the first major-league player to have a positive drug test overturned when he was informed Thursday that an arbitration panel ruled in his favor on appeal and decided against a 50-game suspension for the reigning National League most valuable player.Someone familiar with the decision said the appeal went Braun's way not so much on contesting the result of the test but the testing process itself, some kind of technicality. And it was arbitrator Shyam Das who decided to rule in favor on that technicality, making it a 2-1 decision by the three-man panel. Though the drug testing process is supposed to be confidential, because of leaks of the positive test and hearing, the Major League Baseball Players Association released a statement that Braun won his appeal. The union confirmed it was a 2-1 vote.That statement read: "Under the Joint Drug Agreement, a player's successful challenge to a suspension normally would not have been made public. The parties have agreed, given the particulars of this case, that an announcement is appropriate."It is my understanding that MLB officials are not pleased with how this played out and will be making a statement in support of the drug testing process. And they indeed have put out a statement saying they "vehemently disagree" with the arbitrator's decision, referring to Das. Here is that statement, which came from Manfred: “Major League Baseball considers the obligations of the Joint Drug Prevention and Treatment Program essential to the integrity of our game, our Clubs and all of the players who take the field.  It has always been Major League Baseball’s position that no matter who tests positive, we will exhaust all avenues in pursuit of the appropriate discipline.  We have been true to that position in every instance, because baseball fans deserve nothing less.“As a part of our drug testing program, the Commissioner’s Office and the Players Association agreed to a neutral third party review for instances that are under dispute.  While we have always respected that process, Major League Baseball vehemently disagrees with the decision rendered today by arbitrator Shyam Das.”And now Ryan Braun has issued a statement:"I am very pleased and relieved by today's decision. It is the first step in restoring my good name and reputation. We were able to get through this because I am innocent and the truth is on our side."We provided complete cooperation throughout, despite the highly unusual circumstances. I have been an open book, willing to share details from every aspect of my life as part of this investigation, because I have nothing to hide. I have passed over 25 drug tests in my career, including at least three in the past year."

Click on that link. The whole story is interesting.

I'm sure more info will come out in regards to this news. Ryan Braun and the Brewers come to Dodger Stadium late May.
Posted by Roberto Baly at 3:00 PM