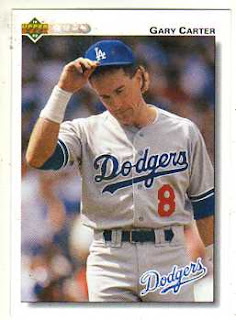 
Hall of Fame catcher Gary Carter passed away Thursday after a lengthy battle with brain cancer. He was 57.
Best known for his role on the 1986 World Series champion Mets and for his 10-year run with the Expos that preceded it, Carter had been battling cancer since doctors discovered inoperable tumors on his brain in May 2011. His condition took a turn for the worse when an MRI revealed new tumors in January 2012.
{linked here}

I have a Gary Carter story. I'll share it tomorrow. Rest in peace Gary.
Posted by Roberto Baly at 2:30 PM

Gary Carter was one of my favorite catchers back in the day.

Baseball lost a great Hall of Famer. He's the one who put the Mets over the top. I was lucky enough to meet him at a Long Island Ducks game. He'll be missed.

It's a sad, with one of our own passing away. My condolences to Gary's family, love ones and friends and may h rest in peace.

REST IN PEACE to a true "HOF" you will be truly missed. My prayers & thoughts go out to your family!