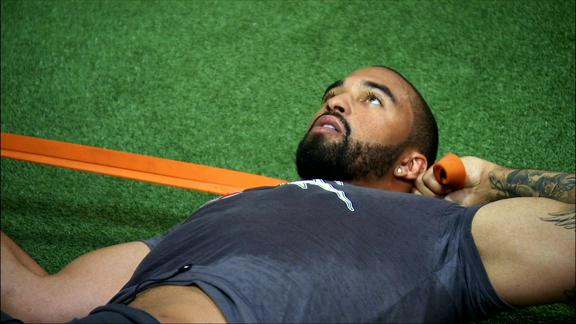 Back in the day players would arrive to Spring Training to get in shape. Not anymore! (Unless you're Juan Uribe).

Matt Kemp will arrive in Camelback Ranch in great shape. From the AP - {linked here}


The Los Angeles Dodgers’ All-Star center fielder spent last winter training at Zone Athletic Performance in Scottsdale, Ariz., a gym owned by Philadelphia Eagles guard Evan Mathis.
Kemp credits the trainers at Zone for his dramatic turnaround after a tumultuous season in 2010. He batted just .249, drew the ire of Dodgers GM Ned Colletti and made more headlines for dating Rihanna than for his performance. At Zone, Kemp learned a new exercise routine and diet regimen that he now follows religiously.
“Working out here definitely got me in the best shape of my life,” Kemp said in a telephone interview with The Associated Press. “I was lighter than I’ve ever been, stronger, faster. They teach you how to eat right and they definitely know what they are talking about when it comes to weight training.”
“A guy like Matt Kemp is the epitome of hard work, dedication, and commitment,” Mathis said. “He always shows up to his workouts ready to improve and is constantly making sure he’s on top of his diet. The most important part of all is that he remembers his formula for success. Even after signing a massive contract, he still shows the same drive that he did when he was trying to prove himself.
“He’s the definition of a winner.”
The Zone Athletic Performance is in Scottsdale, Arizona. Click here for more info.