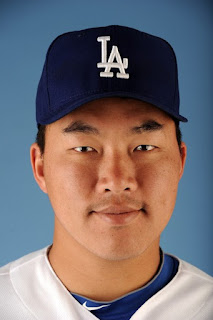 Hong-Chih Kuo has signed a one year deal with the Seattle Mariners.

From Dylan Hernandez of the L.A. Times {linked here}


If Hong-Chih Kuo recaptures the magic that made him baseball’s most dominant reliever in 2010, he won’t do it with the Dodgers.
The former All-Star left-hander has signed a one-year major league contract with the Seattle Mariners, according to a person with knowledge of the situation who spoke on the condition of anonymity because the deal hasn’t been officially announced.
The Dodgers didn’t tender a contract offer this winter to Kuo, who earned $2.725 million last season and was due for a raise in the salary arbitration process. They maintained contact with him, but sounded reluctant to offer him a major league contract because of his medical history.
Kuo underwent his fifth elbow operation in October. He was also sidelined more than a month last season because of anxiety disorder.
Good luck in Seattle. I'll catch you at Angels Stadium.
Posted by Roberto Baly at 12:00 PM

He was the ONLY current dodger to return cards signed thru the mail. Not Kershaw, Kemp, Loney, Broxton, etc. This guy is real class - dodgers should have kept him.