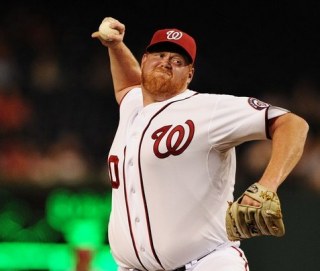 
The Los Angeles Dodgers today announced the signing of right-handed reliever Todd Coffey to a one-year contract with a club option for 2013. The announcement was made by Dodger General Manager Ned Colletti.

The 31-year-old went 5-1 with a 3.62 ERA and limited opposing hitters to a .244 batting average in 69 games last season with Washington. Against right-handed hitters, Coffey posted a .193 opponents’ batting average with just a .250 on-base percentage and a .290 slugging percentage. He also limited first batters faced to a .175 mark (11-for-63) with 17 strikeouts last season.

Coffey, whose full name is Justin Todd, resides in Rutherfordton, NC with his wife Nikki, daughters Hannah and Haley and son Harrison. He was originally selected by Cincinnati in the 41st round of the 1998 First-Year Player Draft out of Chase (NC) High School.
Posted by Roberto Baly at 8:00 AM