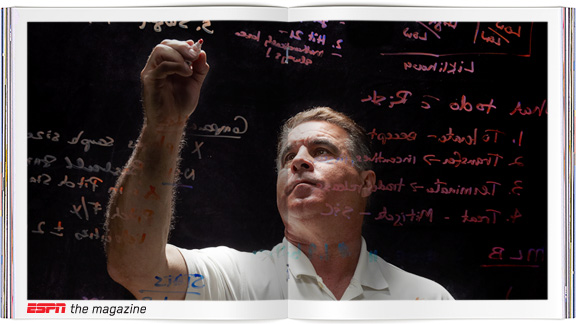 There are many hurdles to accurate prognosticating. Conte's research deals in percentages. More a weatherman than a psychic, he can tell you that $22 million was lost in 2011 to oblique injuries that took an average healing time of 35 days for pitchers and 26 days for position players. He also knows that players almost always injure the oblique on the side they lead with (left for righthanders and vice versa) and that hitters account for 56 percent of those injuries. Finally, he can say that a player put on the DL with that malady has a 12.2 percent chance of being DL'd with it again. It's with numbers like this, however, that trouble starts. Due to a lack of data, Conte has no way of isolating other variables that predict aggravation of the injury.

Read the full story. Hopefully the Jason Schmidt part of this story doesn't make you scream. Oh and remember the signings of Vicente Padilla and Jon Garland?

In the Dodgers' new methodology for acquiring players, in which DL projections sit next to OPS stats on the GM's yellow pad, the question can become not only "What is the chance Guy X will get hurt?" but also "How badly will my team be affected if he does?" It might be worth the gamble, Conte says, to add one high-risk, high-reward pitcher to a starting rotation of four reliably healthy hurlers, but it's suicidal to add two. Without many other options prior to last season, the cash-strapped Dodgers signed questionable deals with veteran pitchers Jon Garland and Vicente Padilla. Both promptly went down and combined to win one game all season.

This story also appears in the March 5, 2012 "Analytics Issue" of ESPN The Magazine.
Posted by Roberto Baly at 9:00 AM

Hope we stay healthy this year