I mentioned the fan fest a few weeks ago. Dodgers announced more details! I'm excited for this season.

This year marks the 50th year of the establishment of Dodger Stadium, an indelible Los Angeles landmark that greatly impacted the fabric of the city of Los Angeles, solidified the Dodger franchise in Southern California and offset decades of great moments and memories for countless Los Angeles families.

The Dodgers have launched www.dodgers.com/50th which includes information on Dodger Stadium’s 50th anniversary. The new background of dodgers.com features an image of Dodger Stadium in 1962 on the left contrasted with a present-day photo at the right of each webpage. Stadium colors and Dodger Blue are used throughout.

Starting in March, fans will be able to vote on their favorite moments in Dodger Stadium History. The fan vote will take place at www.dodgers.com/50th and the results will be revealed starting in June with the top moment announced on October 3. The winning moments will be featured in-game and online throughout the 2012 season.

Fans can join the Dodgers on Saturday, May 19 for Dodger Stadium’s 50th Anniversary FanFest presented by State Farm. FanFest will take place from 12:00 to 6:00 p.m. prior to the 7:10 p.m. game against the St. Louis Cardinals. FanFest will feature autograph sessions with current and former Dodger players, question and answer sessions with Dodger players and coaches and family-friendly games and activities. Entry is included in the price of a game ticket for that day. Several Dodger sponsors and broadcast partners will be on hand to help celebrate with various giveaways and promotions.

The Dodgers will roll out a vast array of Dodger Stadium 50th Anniversary collectible items. 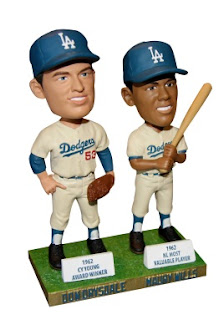 Unveiled this past offseason, the unprecedented Dodger Stadium Greats Bobblehead Series pays tribute to some of the most unforgettable Dodgers in Dodger Stadium history. The complete collection features Don Drysdale with Maury Wills on April 28 (vs. WAS), Orel Hershiser on May 15 (vs. ARI), the historic Dodger infield of Steve Garvey, Davey Lopes, Bill Russell and Ron Cey on May 29 (vs. MIL), Mike Scioscia on June 12 (vs. LAA), Eric Karros on June 28 (vs. NYM), Hall of Fame Manager Tommy Lasorda with Hall of Fame Manager Walter Alston on July 14 (vs. SD), Kirk Gibson on July 31 (vs. ARI), Sandy Koufax on August 7 (vs. COL), Fernando Valenzuela on Aug. 21 (vs. SF) and Hall of Famer Vin Scully on August 30 (vs. ARI). 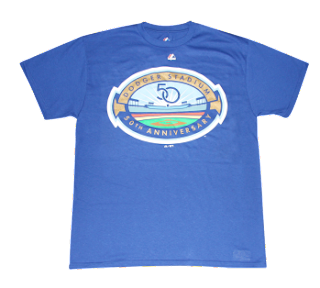 Dodger Stadium 50th Anniversary merchandise includes a logo t-shirt ($25) and patch ($14) which are available now at the Dodgers Official Store at the Top of the Park. Merchandise is available year-round and prices for all 2012 merchandise have been reduced 20 to 50 percent from last season.

All season ticket holders and fans attending games at Dodger Stadium this year can look forward to a commemorative ticket design. The Dodgers’ new season tickets incorporate 24 of the greatest moments and players in the stadium’s history. Opening Day Tickets are designed to replicate the look of Dodger Stadium’s first Opening Day tickets on April 10, 1962. Single game tickets feature an image of the stadium along with the celebration’s official logo.

This past offseason, the Dodgers began collecting interviews and content for the “Dodger Stadium: 50 Years of Fans” series that celebrates the Dodgers’ most loyal fans – longtime season ticket holders. Several stories have been recorded in which favorite memories at “Blue Heaven on Earth” are shared. These stories will also be featured in the Dodgers’ 2012 marketing and advertising campaign.

Celebrating throughout the season with favorite promotions 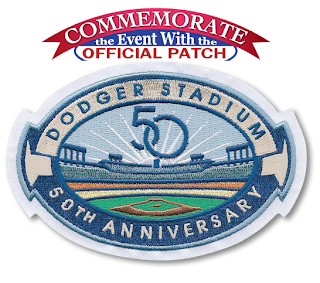 The Dodger Stadium 50th Anniversary presented by State Farm logo features a panoramic view of the stadium's famed multi-colored seating decks. Traditional Dodger Blue is complemented by the building's mid-century modern color palette, while the gold banner and lettering signify the stadium’s golden anniversary. The points on the sunburst each represent a Major League Baseball ballpark opened and closed for baseball use during the 50-year life span of Dodger Stadium.  The logo will appear as badges on the Dodgers’ uniforms and throughout the stadium during the 2012 season.
Posted by Roberto Baly at 9:00 PM

This sounds like an AWESOME event. I can't wait for Dosgers baseball & the sound of Scullys voice:)