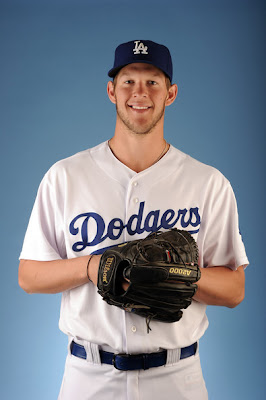 
Kershaw, 24 next month, accepted $19 million for two years to avoid arbitration, after earning $500,000 last year. He had sought a $10 million salary, with the club offering $6.5 million and a hearing scheduled for Feb. 14.
"It made sense for everybody," said Kershaw. "We tried one year and four years, but two worked for everybody."
Colletti confirmed the sides discussed deals for one, two and four years, plus an option. New negotiator Alex Tamin was prepared to go to a hearing and argue that Kershaw's $10 million asking price was an overreach, but the sides were able to work things out.
Posted by Roberto Baly at 5:30 PM

This is great news:) & what was really cool was that I got to crongradulate him when I got to meet him at the dodgers caravan today! Him, the rest of the dodgers & the entire staff were AWESOME!!!! :)

Hi, I liked your blog and I invite you to join our website http://www.coollectors.com - The World's Free Collectors Zone.
Hope to see you soon -:)
Thanks,
Shelly