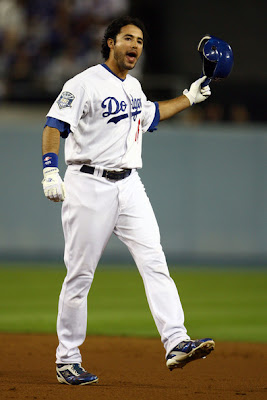 I wouldn't want to be the one that tells Andre Ethier that he's sitting in the bench against left-handers. Just imagine his reaction.

PHOENIX (CBS) – Dodgers manager Don Mattingly talked to the media for the first time this Spring Training and announced Cy Young winner Clayton Kershaw will start on Opening Day.His most intriguing comments came when talking about 1B/OF Jerry Sands’ role with the team.

”Jerry was really good against lefties last year, but we’ve got to be able to get him x number of at-bats. I hate the thought of saying that we’ll platoon guys, but the numbers say (James) Loney and (Andre) Ethier weren’t good against lefties.  We’ll mix and match.”

Click here for more info on Ethier batting against lefties.
Posted by Roberto Baly at 9:00 AM

Yeah but do you believe it will happen? Not sure.

It's going to be a interesting season for Ethier. Can he rebound or just struggle?

I know Ethier wont be happy but Donny has to look out for the good of the team.