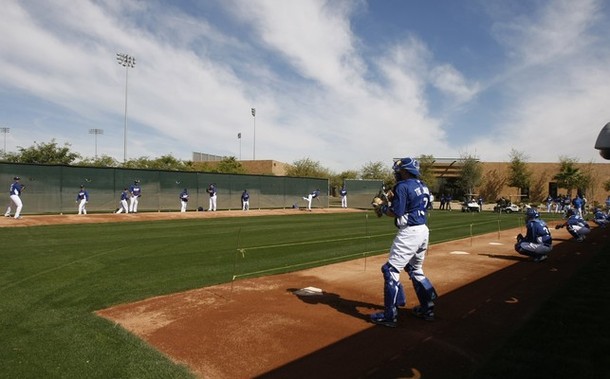 Notes from the Dodgers -

ClaYton’s BACK: Reigning National League Cy Young Award winner Clayton Kershaw threw his first official bullpen of the spring this morning, after being pushed back a couple of days due to mild back stiffness. Right-handed reliever Mike MacDougal also returned to the mound after being pushed back a day due to the same ailment as Kershaw. Four-fifths of the Dodgers’ projected starting rotation toed the rubber today as Aaron Harang, Chad Billingsley and Ted Lilly joined Kershaw on the hill. In addition to the aforementioned hurlers, Jamey Wright, Fernando Nieve, Angel Guzman, Wilfredo Ledezma, Josh Lindblom, Nathan Eovaldi, Chris Withrow, Scott Rice, Ryan Tucker and Michael Antonini threw bullpen sessions today.

TED’S EXCELLENT ARRIVAL: Dodger left-hander Ted Lilly reported to camp today and threw his first bullpen following a two-day absence to witness the birth of his daughter Nora on Tuesday. In addition to Lilly, new Dodger outfielder Matt Angle, who was claimed off outright waivers from Baltimore yesterday, reported to Camelback Ranch – Glendale. A few position players were also spotted in the Dodger clubhouse, including Matt Kemp, James Loney, new Dodger second baseman Mark Ellis, Jerry Sands, Tony Gwynn Jr., Alex Castellanos, Alfredo Silverio and Dee Gordon. While many position players are already in camp, the full squad does not officially report until February 27 with the first full-squad workout on the following day.

BEA GRATEFUL: The Dodgers would like to wish a very happy birthday to longtime organist Nancy Bea Hefley who will enter her 25th season with the club in 2012. Nancy Bea has a repertoire of over 2,000 songs and last year the Dodger Sports Lab made an excellent video of our birthday girl. The video can be accessed by going to this link {linked here}

OPENING DAY COUNTDOWN: The Dodgers will open up the 2012 regular season against the Padres at San Diego’s PETCO Park on Thursday, April 5. Clayton Kershaw will make his second straight Opening Day start for the Dodgers and game time is at 4:05 p.m. Only 41 more days!

THE BIG BOARD: Baseball America released its 23rd annual Top 100 Prospects list in their most recent issue and three Dodger pitchers were included in the rankings. Right-hander Zach Lee checked in at No. 62 after being 89th on last year’s list while RHPs Allan Webster (No. 95) and Nathan Eovaldi (No. 96) appeared back-to-back on the list. The latter two are on the club’s 40-man roster and Lee was the club’s first round draft pick in 2010 (No. 28 overall).

HEY, WHY NOT?: On March 1, the Dodgers will hold their annual open tryout here at Camelback Ranch – Glendale, hosted by the amateur scouting department. The tryout will take place from 9:00 a.m.-1:00 p.m. and potential prospects can call 323-224-1512 for details and instructions.

TROLLEY DODGERS: New for 2012, fans can ride a free trolley from the Westgate City Center to all Dodgers and White Sox games at Camelback Ranch – Glendale. The trolley stop is located on Westgate Boulevard right across from Yard House and drops off outside the ballpark. The trolley runs every 40 minutes starting at 11:00 a.m. with continuous service throughout and after the game.
Posted by Roberto Baly at 7:30 PM