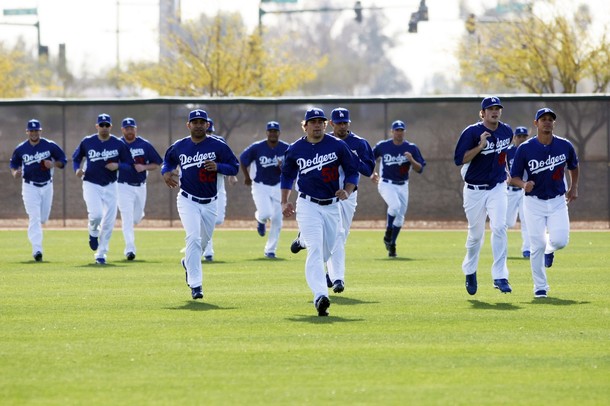 Notes from the Dodgers -

HILLTOPPERS: Dodger pitchers and catchers took the field for their second official day of workouts this spring with fielding drills and bullpen sessions for 14 hurlers. Among those taking the mound this afternoon for their first bullpens of the season was newly-acquired free agent left-hander Chris Capuano, who won 11 games in 33 games (31 starts) last season for the Mets and has limited left-handed hitters to a .229 batting average in his seven big league seasons. Capuano was joined on the hill by fellow lefties Scott Elbert, Alberto Castillo, Matt Chico and John Grabow and right-handers Todd Coffey, Matt Guerrier, Ronald Belisario, Javy Guerra, Ramon Troncoso, Kenley Jansen, Will Savage, Stephen Fife and Josh Wall.

ROSTER UPDATE: Today, the Dodgers claimed outfielder Matt Angle off outright waivers from Baltimore and added him to the 40-man roster. Angle, 26, saw his first big league action in 31 games last season with Baltimore and also batted .271 with 27 steals in 30 attempts over 108 games with Triple-A Norfolk. The Orioles’ seventh round selection from the 2007 draft has stolen 169 bases over his five minor league seasons and also had 11 steals in 12 attempts with the Orioles last season. To make room on the roster, right-hander Rubby De La Rosa was placed on the 60-day disabled list. In addition, right-handed pitcher and non-roster invitee Jose Ascanio has left Dodger camp after failing his physical on Tuesday. With his departure, there are now 31 pitchers in camp with Ted Lilly expected in Arizona shortly after the birth of his second child, Nora Grace, on Tuesday. While many position players are already in camp, the full squad does not officially report until February 27 with the first full-squad workout on the following day.

A CUTT ABOVE THE REST: Pitchers worked through their practice and bullpen sessions today under the watchful eye of Rick Honeycutt, who enters his seventh season as Dodger pitching coach and is Los Angeles’ longest-tenured uniformed coach. Since he took over as pitching coach in 2006, Los Angeles has posted a Major League-best 3.84 team ERA with the Dodgers leading the National League in ERA in both 2008 and 2009. Under Honeycutt’s tutelage last season, the Dodgers posted the Majors’ fifth-lowest team ERA (3.54) and opponents’ batting average (.241).

IN THE TRAINING ROOM: Sue Falsone monitored the Dodgers’ workouts at Camelback Ranch – Glendale again today in her first season as the club’s Head Athletic Trainer and fifth overall season with Los Angeles after serving as the team’s physical therapist from 2007-10. Falsone makes history this season as the first female head athletic trainer in all of major professional sports and she along with Assistant Athletic Trainer Nancy Patterson will give the Dodgers the first pair of female trainers on one staff in the history of Major League Baseball. Assistant Athletic Trainer Greg Harrel and Strength and Conditioning Coach Stephen Downey will also join the Major League staff after serving on the staff at Triple-A Albuquerque last season. Ichiro Tani returns for an eighth season on the Dodger training staff in his role as massage therapist.

TROLLEY DODGERS: New for 2012, fans can ride a free trolley from the Westgate City Center to all Dodgers and White Sox games at Camelback Ranch – Glendale. The trolley stop is located on Westgate Boulevard right across from Yard House and drops off outside the ballpark. The trolley runs every 40 minutes starting at 11:00 a.m. with continuous service throughout and after the game.

THE VOICE: On March 31 at Dodger Stadium, the Dodgers will be holding “Red, White and Dodger Blue Anthem Auditions.” Performers will be asked to sing a cappella and begin at “rockets’ red glare” with select participants being chosen to sing the National Anthem during the 2012 season. For more information, visit Dodgers.com/Anthem.
Posted by Roberto Baly at 7:00 PM