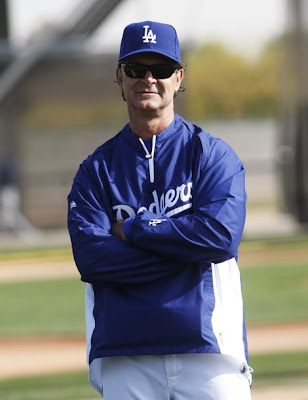 SPRING FLING: Pitchers and catchers took the field for their first official workout this morning as the Dodgers opened their fourth Spring Training at Camelback Ranch – Glendale. All but one of the 33 pitchers (12 non-roster and 1 Restricted List) and all six catchers (three non-roster) reported yesterday. While many position players are already in camp, the full squad does not officially report until February 27 with the first full-squad workout on the following day.

THE NEWEST DODGER: Ted Lilly is the only member of the Dodgers’ battery yet to report to Spring Training and congratulations are in order for him and his wife, Natasha, on the birth of their second child yesterday! The newest member of the Dodger family is Nora Grace Lilly, weighing in at 7 pounds, 14 ounces.

DROP THE KER-TAIN: Yesterday, Manager Don Mattingly announced that 2011 Cy Young Award winner Clayton Kershaw will make his second consecutive Opening Day start for the Dodgers on April 5 at San Diego. Kershaw will become the first reigning Cy Young Award winner to make an Opening Day start for Los Angeles since Sandy Koufax in 1964 and the first Dodger to make consecutive starts in the season opener since Derek Lowe from 2005-07.

BOOMER SOONER: Steve Yeager worked with the Dodger catchers this morning in his first day in his new role as the club’s catching instructor. Yeager, who was teammates with current Dodger coaches Davey Lopes, Rick Honeycutt, Ken Howell and Manny Mota and broadcaster Rick Monday, will work with the team’s catchers at Spring Training and during home games during the regular season. He will also serve as a special-assignment catching instructor for the minor leaguers when the Dodgers are on the road.

IMMORTAL TOMMY: Yesterday, Dodger Hall of Fame Manager and Special Advisor to the Chairman Tommy Lasorda reported for his 63rd Spring Training with the Dodgers. Lasorda recently returned from a trip to the Dominican Republic, where he had a statue unveiled in his likeness by the Latino Baseball Hall of Fame at their Paseo de los Inmortales in La Romana, Dominican Republic.

THE VOICE: Yesterday, the Dodgers announced on Facebook and Twitter that they will be holding “Red, White and Dodger Blue Anthem Auditions” on March 31 at Dodger Stadium. Performers will be asked to sing a cappella and begin at “rockets’ red glare” with three participants being chosen to sing the National Anthem during the 2012 season. For more information, visit Dodgers.com/Anthem.

TROLLEY DODGERS: New for 2012, fans can ride a free trolley from the Westgate City Center to all Dodgers and White Sox games at Camelback Ranch – Glendale. The trolley stop is located on Westgate Boulevard right across from Yard House and drops off outside the ballpark. The trolley runs every 40 minutes starting at 11:00 a.m. with continuous service throughout and after the game.
Posted by Roberto Baly at 7:30 PM

Hrm, Javy add a knuckler to his arsenal?

Sup Roberto was fun pitching to you in the tournie few weeks ago.

Donnie is going to be manager of the year in 2012. After 12 to 15 on the DL last season the 12 games under .500 and hired Hansen as batting coach and wow 40-24 and with everything that could go wrong did and to finish over .500 I know Donnie is going to take the Dodgers to post season.. I've been a Dodgers for 52 year of my 59 living years and Bleed blue. Donnie we dogged you last season. but after the end of the season I told all my posting friend and all others , who could had started a team with 15 DL and two finish the season from the start, Kemp and Loney the you did a darn great job Donnie...

We love you Uncle Vinny. You been a father be million of us and my sons a agree with me.. IT'S not baseball season till I hear the voice of baseball the voice of the Dodgers Vin Scully. You are truly the greatest friend since I was 8 years old 51 years ago..and hope you keep calling the Dodgers games forever and ever. I was raised by you. 1-3 and 6-9 innings on Radio and the only reason I got mlb TV so i can hear the voice of the Dodgers..you can call a game a tell a story and never miss a beat. You and all my friends consider you like a Father and a grand father to my sons. Baseball without you I couldn't imagine on way. We and I MEAN we LOVE YOU VINNY. Saying your the greatest is an understatement..thank you.