Vin Scully is getting a Bobblehead! 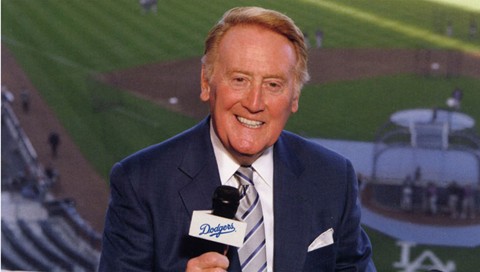 I know it's huge news when my wife sends me a text and tells me that Vin Scully is getting a bobblehead!

It's finally here. This is great news! I was driving when I got the news. I guess the Dodgers were able to convince Scully. :)

The Dodgers unveiled today the final three collectibles in the Dodger Stadium Greats Bobblehead Series which will be given away as part of the 2012 promotional schedule and now features the first-ever bobblehead of Hall of Fame Broadcaster Vin Scully. The complete set of ten includes Eric Karros’ first Dodger Stadium bobblehead on June 28 (vs. NYM), Kirk Gibson on July 31 (vs. ARI) and Hall of Famer Scully on August 30 (vs. ARI).

The unprecedented Dodger Stadium Greats Bobblehead Series pays tribute to some of the most unforgettable Dodgers in Dodger Stadium history. The collection also features Don Drysdale with Maury Wills on April 28 (vs. WAS), Orel Hershiser on May 15 (vs. ARI), the historic Dodger infield of Steve Garvey, Davey Lopes, Bill Russell and Ron Cey on May 29 (vs. MIL), Mike Scioscia on June 12 (vs. LAA), Hall of Fame Manager Tommy Lasorda with Hall of Fame Manager Walter Alston on July 14 (vs. SD), Sandy Koufax on August 7 (vs. COL) and Fernando Valenzuela on Aug. 21 (vs. SF).

The all-time Los Angeles Dodgers home run king Eric Karros will be featured on the club’s fifth bobblehead night on Thursday, June 28 when the Dodgers face the New York Mets. Karros blasted 270 home runs over his 12 seasons in Los Angeles and won the Rookie of the Year Award in 1992, starting a streak of five consecutive Dodgers to take home the honor. This marks Karros’ first Dodger Stadium bobblehead.

The National League’s 1988 MVP Kirk Gibson will be featured on the Dodgers’ seventh bobblehead night on Tuesday, July 31 when Gibson will manage Arizona against Los Angeles. Gibson played just three seasons with Los Angeles, but as the heart and soul of the 1988 World Champions, provided one of the greatest moments in baseball history with his dramatic walk-off home run to win Game 1 of the Fall Classic. This is the second Dodger Stadium bobblehead for Gibson.

Hall of Fame Broadcaster Vin Scully will be featured on the club’s final bobblehead night on Aug. 30 when the Dodgers take on Arizona. Entering an unprecedented 63rd season broadcasting the Dodgers, Scully’s 62 years of consecutive service with the Dodgers is the longest of any sports broadcaster with one team. This marks the Hall of Famer’s first Dodger Stadium bobblehead.

The best way for fans to collect the entire Dodger Stadium Greats Bobblehead Series, to purchase Opening Day tickets and to participate in all other 2012 promotions, is to purchase season tickets which start at $5 per ticket and $16 per ticket for Field Level seats. The collectible series is also included in a 10-game mini plan. Several 15-game mini plans that include Opening Day and two bobblehead games from the Dodger Stadium Greats Bobblehead Series are also available. The 25-game Pick ‘Em Mini Plan is another way to buy Opening Day tickets and to secure collectible bobbleheads. Mini plan pricing starts at $8 per seat. Information on season ticket options including mini plans is available at dodgers.com/tickets.

The full promotional schedule is available at dodgers.com/promotions.

I never stopped believing, not for one moment.

WOW....how awesome!!! I can't wait to put it at the top of my bobble head collection! Thanks for the GREAT INFO!

AWESOME AWESOME NEWS!!!! Thank you Vinny for finally allowing this to happen!!!
On a more "somber" note, I wonder why no Piazza bobblehead? Karros is cool and all, but a Piazza bobblehead wouldve been sick!! I'm wondering if he really just has no desire to ever set foot back in Dodger Stadium. It seems like he has basically disowned his Dodger days since he hasnt participated in any sort of Dodger alumni reunion since he retired. Heck even Raul Mondesi pops up at The Ravine here and there.

I'm so glad I already purchased the 10 game pack. I'll need to try and get a few more tix to that game as well!

Selfishly, I hope is that this isn't to honor him in his final season behind the mic. I want a Vin Scully-less Dodger season to be in the distant future!