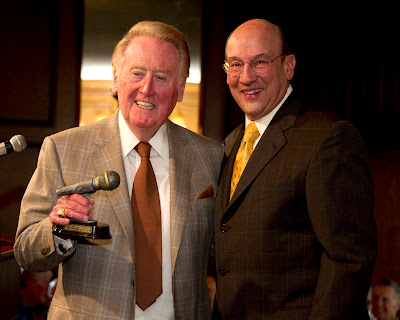 Scully, a member of the SCSB Hall of Fame, was chosen as the best Radio Play-by Play announcer by the SCSB for the 13th time. He has also been awarded the Television Play-by-Play winner 10 times and the Sportscaster of the Year, Broadcaster of the Year and Baseball Play-by-Play Award numerous times. Scully will return in 2012 for an unprecedented 63rd season broadcasting Dodger games.

Monday, who is also in the SCSB Hall of Fame, was honored for Radio Color Commentary by the SCSB. He previously was given the “Chuck Benedict Founders Award” by the organization. 2012 marks Monday’s 19th season as a Dodger broadcaster and 27th season overall with the team, including eight as a player. Monday’s on-air partner, Charley Steiner, accepted the award on his behalf.

Kershaw was honored with the SCSB’s Chuck Benedict Outstanding Achievement Award for his accomplishments during the 2011 season, when the 23-year-old won the National League Cy Young Award, earned the Players Choice Award as the National League’s Outstanding Pitcher, captured a Rawlings Gold Glove Award, was selected as a Sporting News NL All-Star and won the Warren Spahn Award as the game’s best left-handed pitcher, among other accomplishments. Off the field, Kershaw was a finalist for the prestigious Roberto Clemente Award presented by Chevrolet for his charitable endeavors and recently co-authored a book, Arise, with his wife, Ellen, about their charity work together in Africa.

The Southern California Sports Broadcasters today announced a total of eight winners in categories of radio and TV sportscasting as voted upon by its members. The organization is in its 54th year in Los Angeles and current and former Dodger broadcasters Vin Scully, Jaime Jarrín, Rick Monday, Don Drysdale, Ross Porter and Jerry Doggett are all members of the organization’s Hall of Fame.