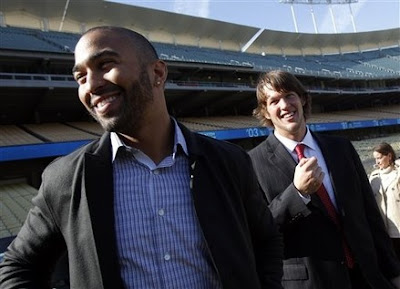 The Legacy Awards, established by the NLBM in 2000, recognize the best Major League Baseball players, managers and executives with awards given in the name, and spirit, of Negro Leagues legends such as Charleston, Josh Gibson, Cool Papa Bell and Buck O’Neil. The Legacy Awards honor both on- and off-the-field achievement and will be presented at 8:00 p.m. tomorrow at the Gem Theater in Kansas City, MO. The event is part of the museum’s yearlong Buck O’Neil Centennial Celebration with proceeds benefitting the NLBM.

Kemp made a serious run at the Triple Crown this past season and wound up leading the National League in home runs (39), RBI (126), runs (115) and total bases (353). The six-year big leaguer also ranked third in the NL with a .324 batting average and tied for second with 40 stolen bases, finishing one home run shy of becoming just the fifth player in Major League Baseball history to hit 40 homers and steal 40 bases in a single season.

In addition to the Oscar Charleston Award, the 27-year-old was honored with the 2011 Hank Aaron Award, given to the best offensive performer in each league, and won his second Rawlings Gold Glove Award and second Silver Slugger. Additionally, he was selected as Baseball America’s Major League Player of the Year, chosen as a Sporting News All-Star and was named as the National League’s Most Outstanding Player in the Players Choice Award voting. In September, Kemp was chosen as the winner of the sixth annual Roy Campanella Award, which is given to the Dodger player who best exemplifies the spirit and leadership of the late Hall of Fame catcher and is voted upon by Dodger uniform personnel.

Kershaw has already been recognized this offseason by winning the National League Cy Young Award, earning the Players Choice Award as the National League’s Outstanding Pitcher, capturing a Rawlings Gold Glove Award, being selected as a Sporting News NL All-Star and winning the Warren Spahn Award as the game’s best left-handed pitcher. He was also recently named the 2011 Sportsman of the Year by the Los Angeles Sports Council and was honored in his native Texas as the state’s Professional Baseball Player of the Year. Off the field, Kershaw was a finalist for the prestigious Roberto Clemente Award presented by Chevrolet for his charitable endeavors and recently co-authored a book, Arise, with his wife, Ellen, about their charity work together in Africa.

Last season, the 23-year-old became just the 16th National League pitcher to win the league’s Triple Crown since 1900. He led the Majors with a 2.28 ERA, tied with Arizona’s Ian Kennedy for the N.L. lead with 21 wins and ranked first in the league with 248 strikeouts. The left-hander became just the third different Dodger pitcher to achieve the feat, joining Dazzy Vance (1924) and Sandy Koufax (1963, 1965 and 1966).
Posted by Roberto Baly at 7:00 PM