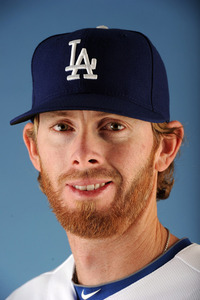 The Los Angeles Dodgers today announced the signing of right-handed reliever Mike MacDougal to a one-year contract with a club option for 2013. The announcement was made by Dodger General Manager Ned Colletti.

MacDougal, 34, was a key member of the Dodgers’ bullpen last season, ranking second on the team with 57.0 innings pitched as a reliever and a career-high 69 appearances. The 11-year Major League veteran ranked seventh among National League relievers (min. 50.0 IP) with a 2.05 ERA while going 3-1 with one save in his first season with Los Angeles.

MacDougal was at his best last season with runners in scoring position, limiting opposing hitters to a .157 batting average (13-for-83), and proved adept in pressure situations by allowing only 17 of his team-high 51 inherited runners to score (33.3%). He had two streaks of 11 consecutive scoreless appearances during the 2011 campaign, shutting down the opposition over 9.2 consecutive innings between June 18 and July 19 and again over 8.2 straight frames from Aug. 16-Sept. 8.

The collegiate All-American at Wake Forest University was originally selected by the Royals with their first-round pick (25th overall) in the 1999 First-Year Player Draft. He resides in Mesa with his wife Mari and their newborn son, Bretton.
Posted by Roberto Baly at 1:40 PM

Hello! There is a
kingston memory card data recovery tool software for you . You can find your
lost memory,just in case !

I'm glad to see this post. By the way, you may be interested in replica ray bans.