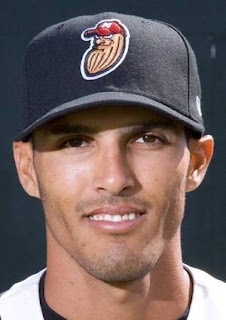 The Dodgers signed Maikol Gonzalez today. Gonzalez is a 25 year old hitter that can play most positions. He played last year for El Paso Diablos, a independent Baseball league and was a 35th round selection of the Colorado Rockies in the 2008 MLB Amateur Draft.

The American Association of Independent Professional Baseball announced today that the contract of El Paso Diablos Infielder Maikol Gonzalez has been purchased by the Los Angeles Dodgers. Gonzalez becomes the 27th league player sold to a major league organization in 2011.Gonzalez played in 62 games for El Paso this past season. He batted .335 with 28 RBI, 47 runs scored and nine triples (T-5th best in league). The resident of Naples, FL also collected 80 hits, stole 21 bases and walked 27 times.The 25-year-old was a 35th round selection of the Colorado Rockies in the 2008 MLB Amateur Draft.  Gonzalez played three plus seasons in the Rockies farm system, including nine games with Modesto in the California League this past season.

i really want that peanut hat.