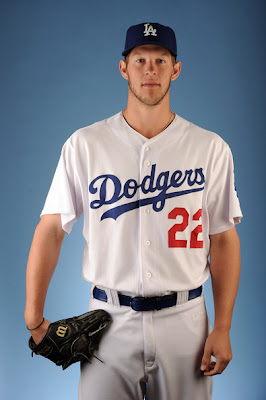 Los Angeles Dodgers pitcher Clayton Kershaw, who capped a remarkable season by winning the National League Cy Young Award, will be presented with the 2011 Sportsman of the Year award during the seventh annual LA Sports Awards, presented by AT&T U-verse on March 15 at Club Nokia at L.A. Live.

The LA Sports Awards are presented annually by the Los Angeles Sports Council to celebrate the greatest moments of the year in sports in the Los Angeles/Orange County area.

The Sportsman award is given to the local male athlete whose performance and character best exemplified the ideals of sportsmanship during the calendar year.

In just his fourth Major League season, Kershaw emerged as one of the game's most dominant pitchers. The 23-year-old All-Star led the Majors with a 2.28 ERA, tied for the National League lead with 21 wins and ranked first in the league with 248 strikeouts en route to winning league's top individual pitching award.

The Texas native was also the Dodgers' nominee for the Roberto Clemente Award in recognition of his charitable endeavors off the field. Kershaw and his wife, Ellen, just returned from their second trip to Zambia and this past season started the Kershaw's Challenge program to donate $100 for each of his league-leading 248 strikeouts to Arise Africa, an organization that helps to build orphanages in the African nation. The couple recently released a book, Arise, about their life and charity work together in Africa.

The awards show will be televised by FSN Prime Ticket (airing dates TBA) and will include special appearances by many of the athletes and coaches whose achievements helped make 2011 such a memorable year in sports.

In addition to the Sportsman award, the ceremony also will feature a countdown of the Top 10 moments for 2011 as selected by a blue-ribbon media panel, along with the naming of the Sportswoman, Coach, and Sports Executive of the Year.

Beginning January 17, through online balloting at www.lasports.org, Southern California sports fans can select the greatest moments of 2011 in 13 different award categories. Voting takes place through February 6; winners will be revealed during the awards festivities.
The event program includes a dinner, followed by the award presentations and video highlights. Winners will receive awards specially created by Tiffany & Co.

The L.A. Sports Council is a non-profit organization and will utilize the event’s proceeds to further its mission of promoting economic development through sports in Southern California.