New Book: The Team that Forever Changed Baseball and America 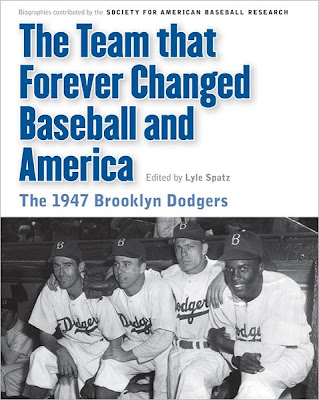 SABR member Lyle Spatz has written a Dodgers book that will be on sale April 1, 2012. Dodgers historian Mark Langill has written the foreword. It's a book about the 1947 Brooklyn Dodgers.

From University of Nebraska Press -

Of all the teams in the annals of baseball, only a select few can lay claim to historic significance. One of those teams is the 1947 Brooklyn Dodgers, the first racially integrated Major League team of the twentieth century. The addition of Jackie Robinson to its roster changed not only baseball but also the nation. Yet Robinson was just one member of that memorable club, which included Carl Furillo, Gil Hodges, Pee Wee Reese, Pete Reiser, Duke Snider, Eddie Stanky, Arky Vaughan, and Dixie Walker. Also present was a quartet of baseball’s most unforgettable characters: co-owners Branch Rickey and Walter O’Malley, suspended manager Leo Durocher, and radio announcer Red Barber.

This book is the first to offer biographies of everyone on that incomparable team as well as accounts of the moments and events that marked the Dodgers’ 1947 season: Commissioner Happy Chandler suspending Durocher, Rickey luring his old friend Burt Shotton out of retirement to replace Durocher, and brilliant outfielder Reiser being sidelined after running into a fence. In spite of all this, the Dodgers went on to win the National League pennant over the heavily favored St. Louis Cardinals. And of course, there is the biggest story of the season, where history and biography coalesce: Jackie Robinson, who overcame widespread hostility to become Rookie of the Year—and to help the Dodgers set single-game attendance records in cities around the National League.
Posted by Roberto Baly at 4:00 PM