Magic Johnson & Mark Cuban to make bids for the Dodgers

If the parking lots is not involved in the Dodgers sale, then don't buy it! What's the point? Frank McCourt is the one that needs to sell the team soon. Wait till he agrees to sell EVERYTHING.

Magic Johnson and Mark Cuban at a GQ party in 2006. 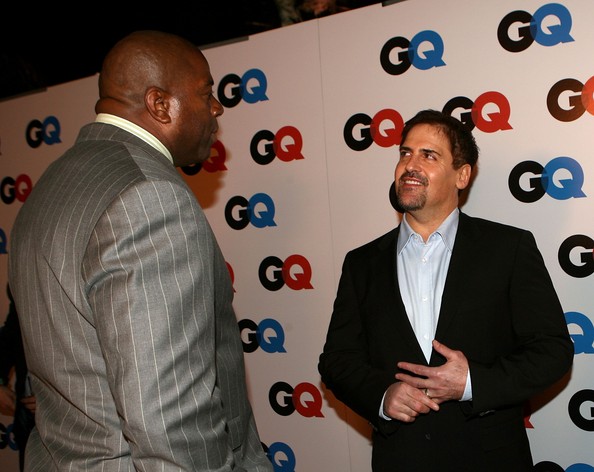 Magic Johnson says he will be making a bid for the Dodgers. Bill Shaikin of the Times - {linked here}


Magic Johnson wants to buy the Dodgers, putting one of Los Angeles' most beloved sports figures in pursuit of the city's cherished baseball team.
Johnson announced his bid in an interview Friday with Los Angeles Times columnist Bill Plaschke.
"I love baseball," Johnson told Plaschke. "I've been a Dodgers fan and gone to the park many, many times."
Johnson would be the face of a high-powered ownership group that would include Stan Kasten, the former president of the Atlanta Braves and Washington Nationals, and Mark Walter, chief executive of Guggenheim Partners, a financial services firm that controls over $125 billion in assets. The firm is headquartered in Chicago and New York, with an office in Los Angeles.
"Stan kasten is my man," Johnson told Plaschke. "He's a winner, he's built two incredible organizations, and he's well respected. That is what was important to me. I had to get with a winner, a guy who understands baseball inside and out
"The first thing I asked Walter was, 'Do you want to win, and do you want to put money in?' He said, 'Absolutely."
Mark Cuban says he will be looking into it too. Also from Shaikin of the Times - {linked here}


Mark Cuban, the owner of the NBA champion Dallas Mavericks, said Thursday that he plans to participate in the bidding process for the Dodgers.
The process could begin next week, when the investment bank handling the sale of the Dodgers is expected to provide prospective buyers with confidential financial data in a so-called "bid book." A party that receives a book is not obligated to bid.
"[I] will see a book," Cuban wrote in an email.
Cuban told The Times last month that he had inquired about buying the Dodgers but "wasn't interested" at an asking price of at least $1 billion.
Posted by Roberto Baly at 9:30 AM