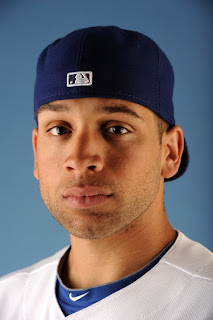 James Loney was arrested while being hospitalized in L.A. last month ... after allegedly smashing his Maserati into THREE other cars ... and then spitting at a cop ... this according to a police report obtained by TMZ.Loney -- who plays 1st base for the Dodgers -- was arrested on November 14th ... because cops say he appeared to be under the influence of drugs after he swerved into a Toyota around 6pm ... and then careened into a Mercedes and a Mini.According to the report, when cops first arrived to the scene ... Loney told one of the officers, "The bitch hit me from behind."Cops say Loney appeared to be "restless, unsteady, aggressive and irritable" ... and he "exhibited eyelid tremors and his shirt was soiled and moist from perspiration, from his armpits down to his waistline."Cops say when officers asked Loney what day it was ... he replied, "7/15 and Saturday" -- when in fact, it was 11/14 and Monday.Loney was handcuffed and transported to a nearby hospital -- where an officer attempted to give him a breathalyzer test.But according to the report, Loney was "uncooperative" -- biting off the mouthpiece and spitting it back at the cop.Cops say Loney began to get aggressive with police ... so they placed him in arm and leg restraints ... and a member of hospital staff gave him "an injection" to calm him down.Loney was released to the care of the hospital and was never brought to the police station for formal booking.Still, cops say they obtained a blood sample to test for drugs and alcohol ... but it came back NEGATIVE. Now the case is in the hands of the L.A. City Attorney's Office.

I told you it was weird!

First, he crashes his Maserati into three cars. Cops come and he acts like a wild man. He was arrested because he appeared to be under the influence of drugs. Didn't know what day it was. He is taken to a hospital for a check up. He gets more aggressive and the nurses give him a injection to calm him down. Blood sample to test for drugs and alcohol came back negative?

I'm not a doctor but he should get check for Vitamin deficiency.

A spokesman said the club was aware of the incident and was looking into it. A representative for Loney could not be reached. The Los Angeles city attorney will decide if Loney will be charged in the incident. The report came five days before the Dodgers are required -- and were expected -- to tender Loney a contract or allow him to become a free agent. He would likely earn roughly $6 million through the arbitration process and is eligible for free agency after the 2012 season.

The Dodgers don't have an obvious everyday replacement for Loney, but were planning to use left fielder Juan Rivera or young outfielder Jerry Sands at first base on occasion to spell Loney next year.

Disappointing news.
Posted by Roberto Baly at 6:00 AM

Maybe LA's Finest were just complete assholes to Loney and he was just responding in kind. He wasn't on drugs or even alcohol and had just been in a serious accident, so maybe they should have tried to "protect and serve" Loney and the community rather than be assholes to him. Had they, then he wouldn't have responded this way. Do you think it's about 99 percent certain this is exactly what happenned.

The stories of these cops are endless ... same guys who the Dodgers REFUSE to allow to carry weapons on Dodger property -- and they planted evidence on OJ, really undisputed since there was blood preservative in the blood "found" which could only have been put there after it was taken from OJ by the police. (This isn't opining on OJ's guilt or innocence, just that it's undisputed the police planted evidence on him, and not he's doing 20 years in Nevada for something else -- which he never would have gotten time for but for the Brentwood case)

The Police are crooked as hell and power crazed, especially when dealing with minorities (but they are with everybody). They caused the problem, not James Loney.

Sad news to hear. I thought James was the straightest of the bunch. Maybe a change of scenery is what the kid needs.

Aaa shut up o.js guilty cops didn't plant evidence get over it.
Loney partially guilty take some responsibility. There's definatly a partial truth to this story we just gotta here Loneys side to get the rest.......