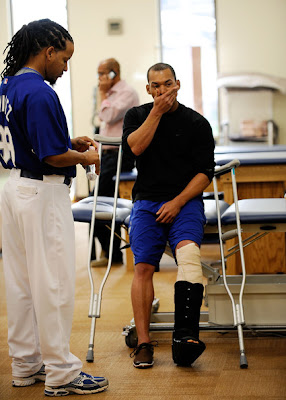 De Jesus is still on the Dodgers 40-man roster. But since Ned Colletti signed every single utility man available this off-season, De Jesus might not get a chance to play in Los Angeles.

De Jesus did get an opportunity to play for the Dodgers this season and he struggled. In 17 games, he batted .188 with a .235 OBP. {Baseball Reference Game Log} You might not remember that he even made the Opening Day roster! Within a month he was sent down to Albuquerque and till this day, I didn't understand the Dodgers decision of not giving him a September call-up.

It's a different story in Winter Ball. De Jesus is is playing for the Leones de Ponce in Puerto Rico and he's killing the ball.

I know it's a Winter Ball league in Puerto Rico but those are some nice stats. He's only 24 years old and I hope the Dodgers give him another look in Spring Training.

Stats obtained from MLB.com
Posted by Roberto Baly at 7:30 AM

Good numbers. I though he'd make a fine utility man in 2012, but Ned is going nuts with the infielders.

I agree. There is no room for him next year now since Colletti went crazy with all these infielders. Why not trade him then? Get something in return.