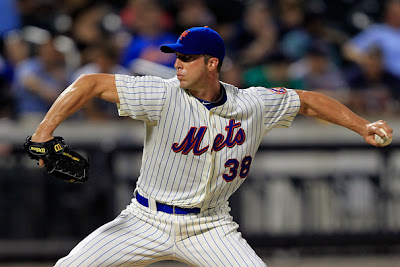 It's now official. Just in, from the Dodgers.

The Los Angeles Dodgers announced today that they have signed left-handed pitcher Chris Capuano to a two-year contract with a mutual option for 2014. The announcement was made by Dodger General Manager Ned Colletti.

“Chris is an established Major League starting pitcher who adds to our staff,” said Colletti. “He made more than 30 starts last season was a reliable part of the Mets rotation.”

After recovering from Tommy John Surgery, Capuano spent last year with the New York Mets, winning 11 games for the second time in his career and posting a 4.55 ERA over 186.0 innings in 31 starts (33 games). The Massachusetts native averaged 8.1 strikeouts per nine innings in 2011.

Over the course of his career, Capuano owns a .229 opponents average vs. left-handers, which ranks sixth among all active pitchers over that time (min. 750 IP). He trails just Dontrelle Willis (.200) and Paul Maholm (.216) among lefties in that span (min. 750 IP).

The southpaw struck a career high 176 batters in 2005 and followed that up with 174 Ks in 2006, ranking second among NL lefthanders in both seasons.

Capuano is a native of West Springfield, MA and graduated from Cathedral (MA) High School where he was the class valedictorian. He then graduated Phi Beta Kappa from Duke University with a degree in economics. Following his graduation from Duke, he was taken by the Diamondbacks in the eighth round of the 1999 First-Year Player Draft.

Capuano currently resides in Scottsdale, AZ with his wife, Sarah.
Posted by Roberto Baly at 1:45 PM