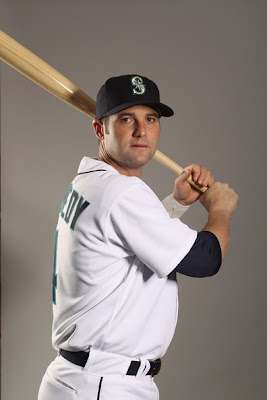 Just in from the Dodgers -

The Los Angeles Dodgers today announced the signing of infielder Adam Kennedy to a one-year contract. The announcement was made by Dodger General Manager Ned Colletti.

“Adam gives us infield depth and an experienced left-handed bat,” said Colletti. “He provides us with infield versatility at second and third base and can play first as well.”

Kennedy has hit .308 with four home runs and 13 RBI in 25 career postseason games during the Angels’ 2002 World Series championship run and again in 2005, when the club was eliminated in the American League Championship Series. Kennedy was selected as the 2002 ALCS Most Valuable Player after batting .357 (5-for-14) with three homers and five RBI in four games against the Twins.

Kennedy has shown his versatility in the field throughout his career, playing primarily at second base, but also appearing in 117 games at third base, 91 games at first base, 13 games in the outfield and one contest at shortstop. At second base, he has a .983 career fielding percentage with an .840 zone rating, which rank 10th and fifth, respectively, among active players.

Last season, Kennedy played three positions (first base, second base and third base) and appeared in 114 games with the Mariners. He ranked second on the club with 23 doubles, while batting .234 with seven homers and 38 RBI.

The J.W. North High School graduate (Riverside) and Orange County resident was originally selected by St. Louis in the first round (20th overall) of the 1997 First-Year Player Draft out of Cal State Northridge.
Posted by Roberto Baly at 11:00 AM