I'm jealous - "The Machine" to Anaheim 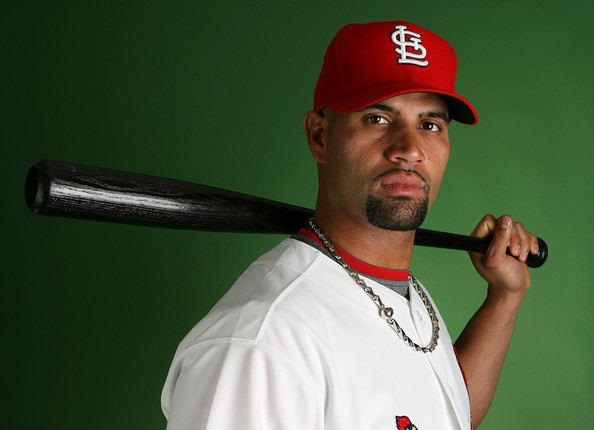 I was in Angels Stadium a few days ago and most Angels fans looked depressed. {linked here} They should be happy now.

I'm jealous. And trust me, I'm not a jealous person. But damn, the Angels just made a huge move by signing Albert Pujols to a 10 year contract worth up to $250 million dollars.

It's a big contract. It might be a bad contract towards the end of the deal but in my opinion you take advantage of his first 7 years. Plus he can DH now that he's in the American League.

I'm shocked. I thought he was staying in St. Louis.


The Angels have agreed to a contract with Albert Pujols, the best free agent available this offseason and arguably the greatest player of this era, sources told MLB.com on Thursday.

The deal, according to Jon Heyman of MLB Network and Ken Rosenthal of FoxSports.com, is for 10 years, includes a full no-trade clause and is worth between $250 million-$260 million. That would rival the record-setting 10-year, $275 million contract Alex Rodriguez signed with the Yankees in December 2007.

In addition, the Angels and left-hander C.J. Wilson, formerly of the Rangers, agreed on a five-year, $75 million deal, a source confirmed.
And C.J. Wilson? Wow.

Angels owner Arte Moreno sure did keep things quiet. As a Dodger fan, I'm not happy that we have a owner that's in trouble and the only headlines that I read is about the divorce and bankruptcy. But I'm happy for the Angels. Congratulations to Arte, Angels fans and Pujols.

Oh and just in case you missed it, our first basemen James Loney was arrested last month. {linked here}

I totally agree with you, Roberto

I agree! I mean sure I am happy that Pujos made it to SO Cal, however I wish he was wearing Dodger Blue.

Im ok with this.. being an autograph junkie im glad hes close by now..

Autograph was the first thing I thought of too. And the fans choice bobblehead they got this year. I'm surprised after they let so many big names go the last few years I thought arty was cheaper then frank

After thinking about this for a while, I think these moves by the Angels and the Marlins are similar to when Texas gave Arod that first 10 year contract.

In specific to the Angels this is sort of a now or never move. To think they're payroll has passed the Sox and might be up there with the Yankees, I just can't see Artie making any sort of profits in the next few seasons unless the Angels sellout every game, and the Halos make it to the ALCS and World Series every year.

In the grander scheme of things I honestly think this has less to do with making the Angels better (eventhough they are better because of this), and it has more to do with making a push for the Halos to move to LA, or at least LA county. It's no secret Artie Moreno feels playing in Anahiem pigeon holds the franchise from being considered a major market team like the Dodgers, Yankees, Mets, Cubs, etc.

It will be interesting to see what happens to us (the Dodgers) because this move for sure puts a flame under the butts of MLB to make sure our next owner can put out a product that can compete with what Artie is putting out there (at least in terms of spending).

I'm not sure if I feel jealous about this because either way Pujols is going into the hall as a Cardinal, and I feel there is a equal chance that this might end up imploding in the Angels face as much as it has a chance of turning them into the west coast Yankees. I mean thinking about if this happen to the Dodgers if we had what the Angels had, a part of me would obviously be happy but another part of me would also be very cynical to the fact we might end up being the next post 2000's New York Mets .

I wish the Halos luck (but not too much luck when they play the Dodgers), and I for sure look foward to Pujols autogrpah sessions and Albert Pujols bobblehead day.