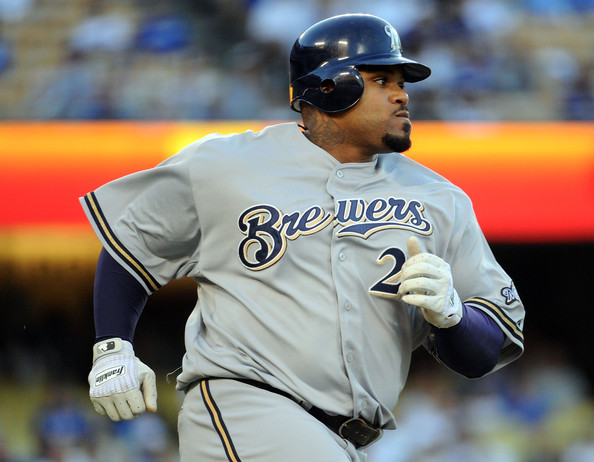 Got this e-mail from David about 6 hours ago.

Roberto! Did you see this report from ESPN? Dodgers after Prince Fielder!

Nop. I did not see the report. And I'm sorry for the late reply. I was out all day. Here is the ESPN story, which is from ESPN Chicago to be exact. It's mostly about the Cubs but the interesting part is at the bottom.

The Chicago Cubs will continue to be involved in the Prince Fielder free-agent bidding, according to two major league sources with knowledge of the negotiations.Cubs manager Dale Sveum said on Friday that the Cubs' interest in Fielder was mostly "media-talk" and that neither he nor Cubs officials have talked to Fielder. An MLB source confirmed Sveum's statement, but also said that Fielder is sitting back while his agent, Scott Boras, talks to ownership and top baseball officials when it comes to negotiating a deal for the Brewers All-Star first baseman.

The Seattle Mariners and Los Angeles Dodgers are reportedly the main suitors for Fielder at this point, with the Cubs still in the running.

Ha! I don't see it happening. Dodgers are already bringing back James Loney. Ned Colletti has said that the payroll is set and the roster is pretty much done with the exception of another reliever.

Unless there is something being planned secretly by the Colletti crew.

Thanks David for the link!
Posted by Roberto Baly at 8:00 PM

If Ned can get this done then I won't be as upset by all the other stupid signing this offseason.

If Ned gets this done it'd be bigger than Chris Paul! Oh yeah, and another signing that took place round here...

If Ned gets this done that means frank is gna try and keep the team . Yup his way of getting the fans back on his side. It's possible

It can't possibly be true. Fielder is neither a washed-up vet in the late 30s not an ex-Giant.

@Orlando - my thoughts exactly. This is McCrook's way of winning over the fans. The whole media rights auction thing is starting to worry me..