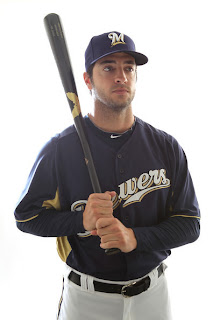 National League MVP Ryan Braun, who last season led the Milwaukee Brewers to their first division title in nearly three decades, has tested positive for a performance-enhancing drug and faces a 50-game suspension if the initial finding is upheld, two sources familiar with the case told "Outside the Lines."

Major League Baseball has not announced the positive test because Braun is disputing the result through arbitration.

A spokesman for Braun issued a statement Saturday: "There are highly unusual circumstances surrounding this case which will support Ryan's complete innocence and demonstrate there was absolutely no intentional violation of the program. While Ryan has impeccable character and no previous history, unfortunately, because of the process we have to maintain confidentiality and are not able to discuss it any further, but we are confident he will ultimately be exonerated."

The 28-year-old Braun had to provide a urine sample for testing during the playoffs, and he was notified of the positive test sometime in late October -- about a month before he was named the National League's most valuable player.

The positive result was triggered by elevated levels of testosterone in Braun's system, the sources also told "Outside the Lines." A subsequent, more comprehensive test revealed the testosterone was synthetic -- not produced by Braun's body.

Can Matt Kemp get the MVP trophy now?
Posted by Roberto Baly at 4:50 PM

Wow, he knew about the positive test BEFORE he was named MVP. That is seriously messed up.

The PEDs dont go away they just get better at hiding it. His only fault is he got caught.