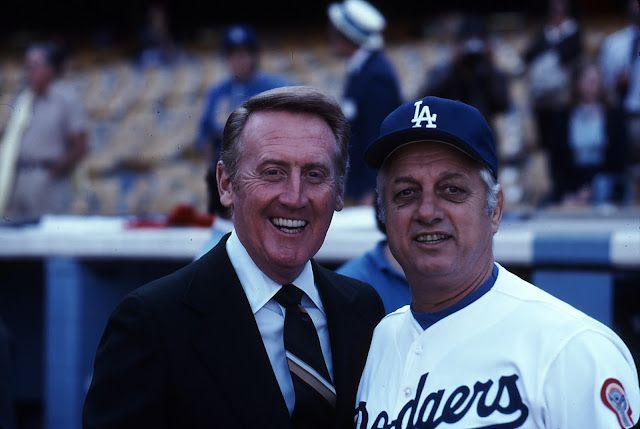 A book titled "The Dodgers: From Coast to Coast" is coming out on April, 2012. Vin Scully will write the introduction and Tommy Lasorda will write the foreword. It's a hardcover book with 256 pages. Retail price: $40.

Since 1901, the Dodgers have drawn more fans than any other baseball franchise in history. Players such as Jackie Robinson, Sandy Koufax, Don Drysdale, Steve Garvey, and Fernando Valenzuela rank among the legends of the game, and former managers such as Casey Stengel, Walter Alston, and Tommy Lasorda stand among the greats. Today, with stars like Clayton Kershaw, Andre Ethier, and Matt Kemp, and manager Don Mattingly, the Dodgers continue to claim legions of dedicated fans.

As the Dodgers toast the 50th anniversary of their Southern California stadium in 2012, this book of original essays, rare photos and documents, and unique memo­rabilia celebrates the colorful and diverse history of the franchise. Here are the early years in Brooklyn, including the historic arrival of Jackie Robinson in 1947 and the fabled 1955 World Series Championship, as well as the move to Los Angeles, where this famous baseball legacy merged with Hollywood.
Posted by Roberto Baly at 10:30 AM

You think once this book comes out they will do a book signing tour! wow that would be bananas!