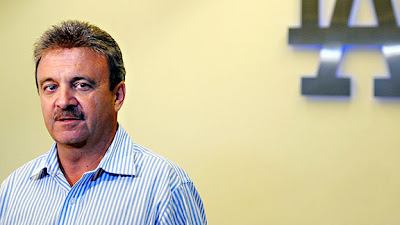 If you're hoping for Prince Fielder or Albert Pujols to come to Los Angeles, you will be disappointed. Dodgers GM Ned Colletti says he has no plans on adding a big bat.

With franchise slugger Matt Kemp on the verge of being locked up long term and just-signed free agent Mark Ellis officially the new starting second baseman, general manager Ned Colletti on Tuesday said the Dodgers offense is pretty well set, with no Prince Fielder addition expected."As far as a big bat, as they say, we'll probably have to pass on that at this point," Colletti said from the General Managers Meetings. "As of today, unless something changes, it looks less realistic."We'll have to figure out other ways to produce runs -- the way Juan Rivera produced for us the second half. We need Juan Uribe to give us offense, and he didn't give us much. And we need Andre Ethier healthy. Any examination of our club seems their seasons were not indicative of the power and production. Andre and James Loney, they should be in the primes of their careers, and we expect them to have a better 2012 than 2011."

Did Colletti pretty much say James Loney will be back?

Loney, Uribe and Ethier need to step it up or we're in deep trouble.
Posted by Roberto Baly at 1:00 PM