"Matt Kemp thinks of himself as Hollywood" 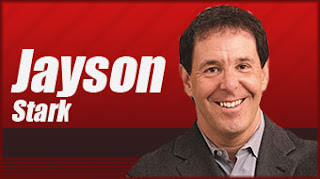 I enjoy listening to baseball podcasts. One of my favorite podcasts is "ESPN Baseball Today". I heard yesterdays episode and Mark Simon interviewed Jayson Stark.

Stark has been the ESPN senior baseball writer since 2000.

Stark made the following comments when asked about Matt Kemp's big contract. (By the way, nothing official yet)

He made big strides last year in a lot of areas. Maturity, commitment to being great. The time and effort he put in. Leadership skills. You know the Dodgers hadn't seen any of that stuff before. There's always a danger when you give a guy this many years and this many dollars that you may not see the same level of commitment in the future and that's my big concern with Matt Kemp. One reason he wanted to be a Dodger, look L.A. is Hollywood and Matt Kemp thinks of himself, I think, as Hollywood. So he's got to avoid those Hollywood temptations. If he doesn't, then there is, this can be a very precarious deal for the Dodgers.

Hollywood temptations? I have no idea what Stark is talking about. Just because he goes out and has fun, that automatically makes him dangerous? Maybe he wanted to mention Rihanna? I don't know. Kemp is not out making movies or dropping rap albums so I'm little confused over the "Hollywood temptations" comment.

You can listen to the podcast by clicking here.
Posted by Roberto Baly at 6:30 AM