Matt Kemp "My goal is to be a Dodger for life" 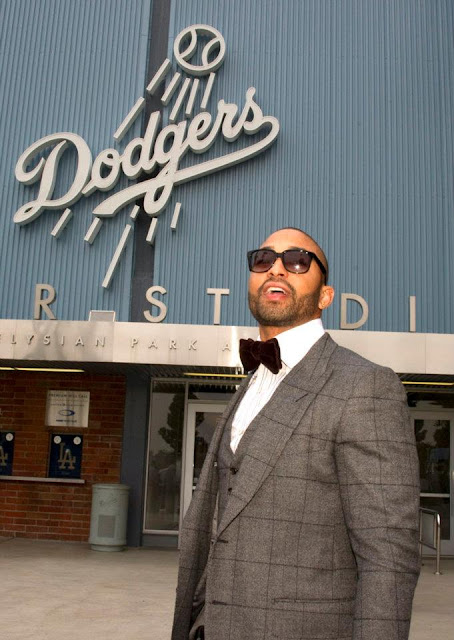 It's official. Matt Kemp will stay in L.A. for the next eight years!

LOS ANGELES – The Los Angeles Dodgers signed MVP candidate and All-Star outfielder Matt Kemp to an eight-year contract extension, keeping him in a Dodger uniform through at least the 2019 season. Dodger Owner and Chairman Frank McCourt made the announcement.

“I’ve watched Matt grow up and I’m proud of him,” said McCourt. “If he continues to grow, there is no doubt in my mind that he is the player this franchise and this community needs. I wish him a tremendous next eight years and also beyond that. Teams need players that stay with one franchise their whole career and I’m very happy for him.”

“I have truly been embraced by the L.A. fans,” said Kemp. “They’ve made Los Angeles home for me. It’s a great feeling to know I’m going to be here for the next eight years, but my goal is to be a Dodger for life – this is where I aim to be until I retire.”

Kemp made a serious run at the Triple Crown this past season and wound up leading the National League in home runs (39), RBI (126), runs (115) and total bases (353). The six-year big leaguer also ranked third in the NL with a .324 batting average and tied for second with 40 stolen bases, finishing one home run shy of becoming just the fifth player in Major League Baseball history to hit 40 homers and steal 40 bases.

Although the MVP Award won’t be announced until Tuesday, Kemp has already taken home several honors since the season ended. He won the 2011 Hank Aaron Award, given to the best offensive performer in each league, garnered his second career Rawlings Gold Glove Award and won his second Silver Slugger. Additionally, he was selected as Baseball America’s Major League Player of the Year, chosen as a Sporting News All-Star and was named as the National League’s Most Outstanding Player in the Players Choice Award voting. In September, Kemp was chosen as the winner of the sixth annual Roy Campanella Award, which is given to the Dodger player who best exemplifies the spirit and leadership of the late Hall of Fame catcher and is voted upon by Dodger uniform personnel.

“Matt has become one of the best players in the game,” said Dodger General Manager Ned Colletti. “He is a player with power, speed and a strong defensive skill set. He has grown as a leader and is someone who never wants to be out of the lineup. At his age, with his talent and passion to be great, we felt Matt was worthy of a deal of this magnitude and are excited about keeping him in the Dodger family for a long time to come.”

The 27-year-old became the first Dodger to lead the National League in home runs and RBI since Dolph Camilli in 1941 and finished the campaign as the first Dodger ever to lead the NL in homers, RBI and runs scored. Heading into next season, Kemp has played in 365 consecutive games, which is easily the longest active games-played streak in the Major Leagues.

Since making his Major League debut on May 28, 2006, Kemp has hit .294 with 128 homers and 457 RBI in 787 career games, all with the Dodgers. In just four full Major League seasons, Kemp ranks eighth in Los Angeles Dodger history in batting average (min, 1800 at-bats), sixth in slugging percentage (.496) and 13th in home runs. His 103 homers as a center fielder rank third in franchise history, trailing just Duke Snider (355) and Willie Davis (154). He is also the fourth-youngest player in franchise history to reach 100 homers.

Kemp’s 764 career games in the outfield already rank sixth in Los Angeles Dodger history, just two behind Kenny Landreaux (766) for fifth. His six career grand slams are tied for the second most in the Majors over the last four seasons and among all Dodgers since 1974.

Last season, Kemp was voted by the fans to start for the National League and went 1-for-2 with a walk in his first Midsummer Classic game.

The Midwest City, Oklahoma native was selected by the Dodgers in the sixth round of the 2003 First-Year Player Draft after being recruited by the University of Oklahoma as a basketball player. In his rookie season of 2006, Kemp became only the fifth player in Major League history to hit seven homers in his first 18 days in the big leagues.

Over the course of his career, Kemp has also excelled off the field. Over the past three years he has personally raised more than $400,000 for families affected by autism at his annual Spring Training fundraiser, made appearances on behalf of the Annual March of Dimes “Be A Hero for Babies Day,” hosted an event with Louis Vuitton to raise funds for the Dodgers Dream Foundation, serves as a spokesperson for Coaching Corp’s, made numerous hospital visits and participated in the Dodgers Winter Caravan and the annual State Farm Bowling Extravaganza. Kemp also launched “Kemp’s Kids,” an initiative that invites kids from various organizations to Dodger Stadium for a pre-game meal and batting practice hosted by Kemp.

“It’s my responsibility to give back to the community and share my blessings,” said Kemp.
Posted by Roberto Baly at 2:30 PM