Is the nightmare over? Frank McCourt might sell the Dodgers 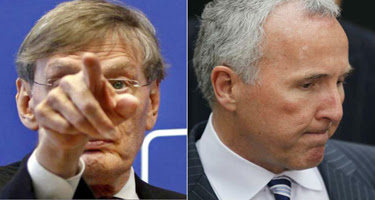 Does Bill Shaikin of the L.A. Times ever take a break? Even on a Halloween evening, he's breaking news about Frank McCourt and MLB.

I'm trick-or-treating around town and I'm getting text messages that I need to check out the latest on L.A. Times. I read the story from my phone while little Mickey Mouse was getting candy for his dad.

From Shaikin of the Times - {linked here}


After a two-year battle to keep the Dodgers through a bruising divorce and a bankruptcy filing, owner Frank McCourt appears close to agreement with Major League Baseball on a bankruptcy settlement in which he would agree to sell the team.
Yes! Yes! Yes! After I read this, I grab a bag of M&M's.


McCourt would get some control over the sale, people familiar with the negotiations said Monday. The purchase probably would include Dodger Stadium and the surrounding parking lots in a package that could command a record price of $1 billion or more.
The negotiations are fluid, and settlement talks could fall apart at any time, said the people, speaking on condition of anonymity because of the confidential discussions. McCourt has not reached any final decision to sell, another person cautioned.
No! No! No! After I read this, I threw up a little.

Of course McCourt will want to control this transaction because he's afraid Bud Selig will sell the team cheap. I'm just hoping there are many people interested in this team.

I do wonder what will happen if McCourt is not satisfied with any interested buyers? Can the court say he will just have to sell to the highest offer? I just don't know if someone is willing to give you $1 billion for this team.

McCourt has long vowed not to surrender the Dodgers. In April, as Commissioner Bud Selig appointed a trustee to oversee the team and attendance plummeted at Dodger Stadium, McCourt insisted he would not sell.However, analysts suggested McCourt now might be willing to sell for a simple reason: Even if he won in court, he could lose.Based on figures McCourt submitted to the Bankruptcy Court, he would be hard-pressed to sell the Dodgers' television rights, settle his divorce and be left with enough capital to renovate Dodger Stadium and restore the team to prominence.

The sad part is that the Dodgers front office are in limbo. I know there is money coming off the books but can Ned Colletti still get a big bat? Just because McCourt is willing to sell the Dodgers, it doesn't mean it will be over soon. It can take months. Hopefully by Opening Day!
Posted by Roberto Baly at 7:30 AM